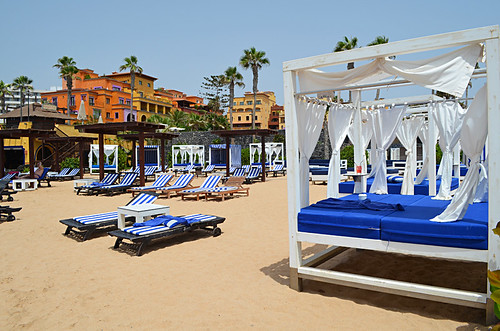 Tenerife Weather 27 June to 3 July
As we didn’t return from Corsica (where it was red hot and sunny) until Friday morning, we can’t say what the weather was really like. Since then it’s been warm but with quite a bit of cloud in parts.

Weather Forecast for Tenerife 4 to 10 July
Overall it looks like it should be a hot and sunny week across Tenerife although this is the time of the year when the belly of the donkey (panza de burro) often visits northern parts. There looks like there could be an odd weather front hitting Tenerife next weekend when temperatures are predicted to rise and there’s also a chance of showers in places.

Weather in South Tenerife –  It should be a sunny week with only some light cloud on Monday. Shade temperatures start the week very warm at 26C dropping slightly to 23/24C midweek before rising back to 25/26C for the weekend.

Weather in North Tenerife – In the north it’s a mix of sun and cloud with even the possibility of a light shower or two (5-40%) towards the end of the week. Shade temperatures will hover between 24/26C all week.

Weather in East Tenerife –  Apart from Monday and Tuesday which should be sunny, the forecast for Santa Cruz is a mix of cloud and sun with a good chance of showers during the second half of the week (5-80%). Temperatures start the week at 26C but will hover around 21/23C from Wednesday onwards.

Weather in South West Tenerife –  Much the same as the south except temperatures will stay around 25/26C until Sunday when there will be a slight jump to 28C.

Weather in the Mount Teide Crater – Apart from some cloud in the afternoons between Monday and Wednesday, it should be sunny In Teide National Park. On the summit of Mount Teide it will simply be sunny. Temperatures should hover between 13 and 16C in the crater and 8 and 11C on the peak of Mount Teide.

The Tenerife Weather This Time in 2015
So what happened this time last year? ‘… It was a hot week on Tenerife but the heatwave which brought sticky weather was as a result of calima which meant that there was a misty haze across Tenerife on some days.’

Pic: July on Tenerife is beach rather than walking weather.