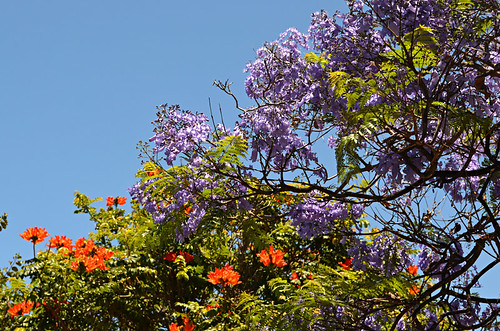 Tenerife Weather 6 to 12 June
Basically it was a very hot and mostly sunny week across Tenerife so that when there were some cloudy spells over the weekend, they came as a relief. It felt more like deep summer weather than the end of spring. Apparently some places saw some rain/drizzle but it was a stranger where we are in the north, although it would be very welcome to see some showers before summer sets in.

Weather Forecast for Tenerife 13 to 19 June
The outlook for the coming week is similar for all coastal parts of Tenerife. Generally speaking the first half of the week should be hot and sunny whilst the second half should be warm with a mix of sun and cloud and a chance of showers. The south west should see the most sunshine, followed by the north with only the south predicted to have a couple of sun free days. Although the north might see more sunshine, there’s also a greater likelihood of rain towards the end of the week. The week should start very hot everywhere, freshening up from Wednesday.

Weather in South Tenerife –  It looks like it there could be more cloud about than in recent weeks with only Tuesday and Sunday being cloud free. Monday will be mostly sunny and Wednesday and Saturday will see a mix of cloud and sun but Thursday and Friday could be grey days. There’s a slight chance of a drizzle from Thursday onwards (5-20%). Shade temperatures start the week very warm at 26 dropping each day to end at around 20/21 by the end of the week.

Weather in North Tenerife –  Sunshine is predicted for every day in the north with Monday and Tuesday being hot and sunny. From Wednesday it will be a mix of sun and cloud and there will likely be some showers (5-80% possibility), especially on Thursday and Friday  (5-45%). Like the south, the week will start very hot at around 26/27C but things will freshen up from Tuesday (23C) to settle around 21/22C for the second half of the week.

Weather in East Tenerife –  The forecast for Santa Cruz is much the same as the north except there could some light cloud on Monday and Tuesday.

Weather in South West Tenerife –  The south west looks like it will be the sunniest part of Tenerife’s coastal areas with mostly sunshine and a few light clouds now and again. There might be a bit more cloud on Friday, but it still should be a mix of sun and cloud. There’s an outside chance of showers during the second half of the week (5-20%) and Temperatures match those of the south.

Weather in the Mount Teide Crater – In Teide National Park there could be a mix of sun and cloud all this week with showers possible on Wednesday and then From Friday over the weekend. During the first half of the week mornings look best bet for cloud free sunshine. On the upper slopes of Mount Teide it should be sunny all week. Temperatures should hover between 10 and 13C in the crater and 4 and 7C on the peak of Mount Teide.

The Tenerife Weather This Time in 2015
So what happened this time last year? ‘… plenty of sunshine across Tenerife but with a few cloudy spells as well, especially earlier in the week.’

Weather Forecast for Tenerife from 28th November to 4th December

There should be a lot of sunshine across Tenerife over the week with the north possibly experiencing slightly more than the south which is great news for San Andrés. […]