Last week I enjoyed reading a Guardian article about readers’ tips for winter walks in the United (for now) Kingdom. Top tip was Mam Tor in Derbyshire. We’ve walked the route and it was a classic Boxing Day walk – snowy hills and a welcoming pub with a roaring fire in which to relish our post-hike rewards.

In previous years we’ve written about our favourite festive season walks on Tenerife. Festive routes are not so much a post-Christmas detox as they generally take place between Christmas and New Year, more a pause in the over indulgence that comes as standard during the festive season. For us, they have to be relatively close by and not too long or challenging, more of a gentle reminder to the body not to become too sloth-like. 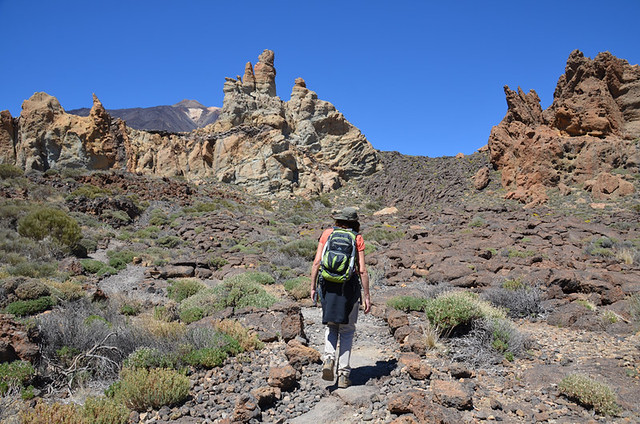 But all the walks we’ve referenced in the past have been ones which were easy for us to get to from the north, so not much use to anyone staying in other areas of Tenerife. To rectify this, here are some suggestions for festive season walking routes around the island. 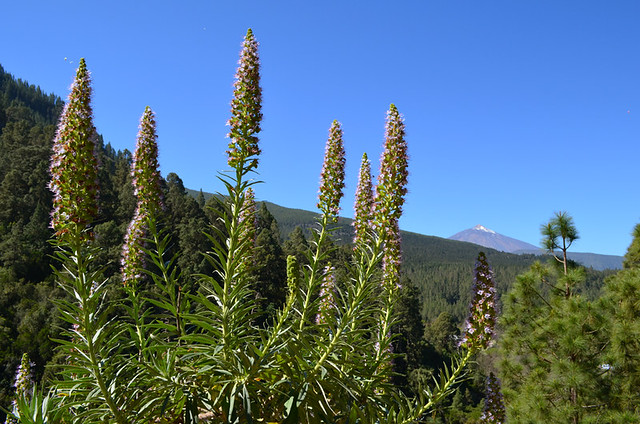 Short festive walks in the north
The pine forest in the upper Orotava Valley fits the bill for festive walking. Some routes from La Caldera near Aguamansa can be a bit too demanding for an easy-ish, post-Xmas pig-out route but a shortish route we like is a circuit from the zona recreativa (picnic zone) which descends through the pines and along country lanes to Aguamansa before it climbs back to La Caldera. There’s a good chance you’ll even get a roaring fire on this one as a log burner is essential heating in some of the restaurants at this altitude. 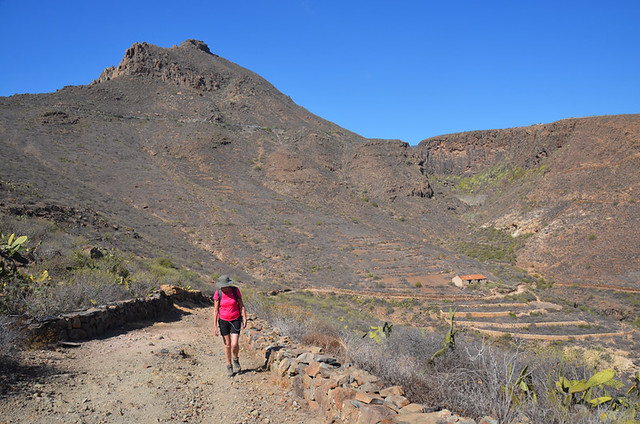 Short festive walks in the south
The Barranco del Infierno in Adeje and Montaña Guaza in Los Cristianos are obvious choices for Christmas walking, but they’re probably not ideal for anyone who likes a bit more solitude when they’re bonding with nature. Personally, I’d head up and east to San Miguel de Abona to follow the former merchants’ trail southwards to Mirador de la Centinela before looping back to the old southern hill town for a late lunch. 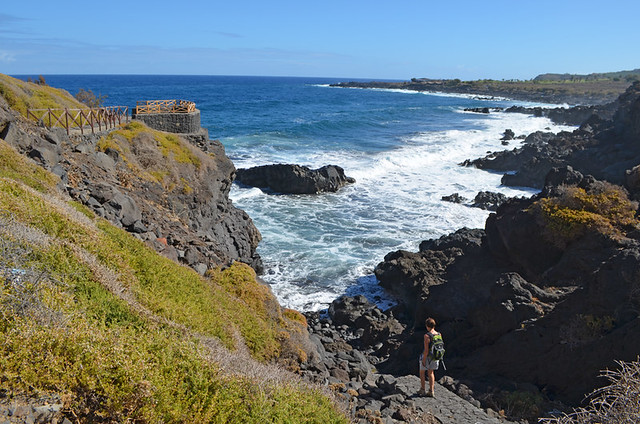 Short festive walks in the north west
Some of our favourite walking routes in Isla Baja are maybe a bit too demanding immediately after a bout of overeating, so we’d head to Buenavista del Norte and take the winding coastal route westwards and back. Breathing in the sea air is a refreshing antidote to excesses and there are so many quirks and points of interest along this route – sea pools, a fishermen’s cove, a beach that comes and goes, volcanic rock formations etc. – that it’s a short route to be savoured. 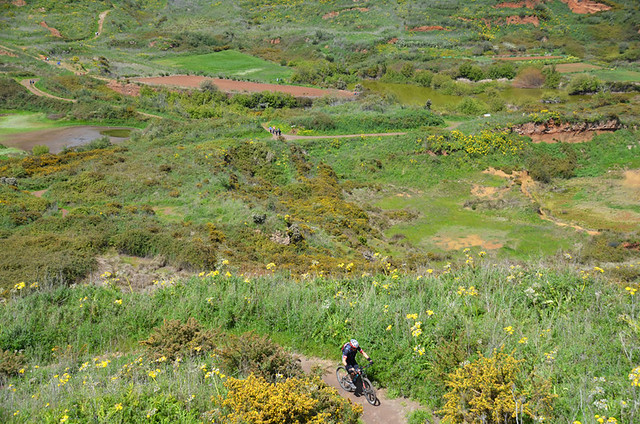 Short festive walks in the south west
The south west is a good hunting ground for short and interesting walking routes. Our top choice would be a circuit around the Erjos Pools. It’s less than a thirty minute drive from the resorts in the south west and is a cracking little route. The pools themselves make it unusual for Tenerife, but you also get pine and laurel forest, views into a more remote part of west Tenerife, and a sensational panorama east that takes in Mount Teide and Pico Viejo. Plus there’s Fleytas Bar, a favourite with walkers and locals, in which to toast the route at the end of the hike. 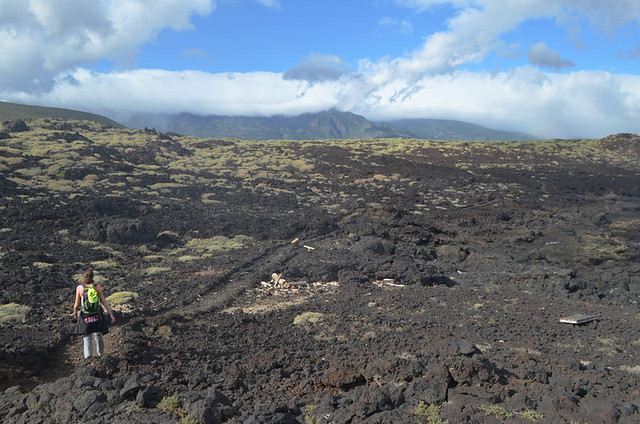 Short festive walks in the east
There are a couple of reasons we’d opt for an explore of the Malpaís de Güímar (Güímar’s volcanic badlands). The first is, like Buenavista del Norte, the freshness of the sea air on the face helps blow Christmas cobwebs away. Similar to its north western counterpart, there are many fascinating aspects to be discovered following rocky paths which cross the dark, volcanic landscape – former coastal defences, volcanic tubes, mini golden sand beaches, salt pans to name a few. The second is that Puertito de Güímar has some good fish and seafood restaurants, ideal for refuelling in after working up an appetite walking in the badlands. 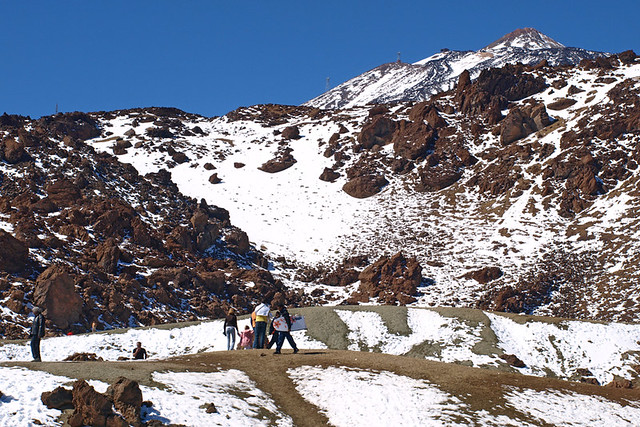 And the festive classic…
The ultimate festive Tenerife walk takes a bit longer to get to, but it can be accessed from various points of Tenerife’s compass. Teide National Park during this time of year can add a festive touch that other parts can’t – snow. If in the north, forget trying to reach the park if snow has just fallen. You’ll find yourself queuing for yonks to get there, then progress through the park is like a descent into madness. Getting back out again can take an eternity (it once took us three hours to get from the cable car back to Puerto de la Cruz). But if the snow has been lying for a few days, so there are only pockets of the white stuff, then the novelty value with locals wears off with each thawing drop and their numbers reduce drastically, making accessing the walking routes in the park straightforward.

Walking in snow on a subtropical island at Christmas is a surreal and special experience.

The walking routes mentioned above are included in our Real Tenerife Island Walks sets. Click here for more information about them.