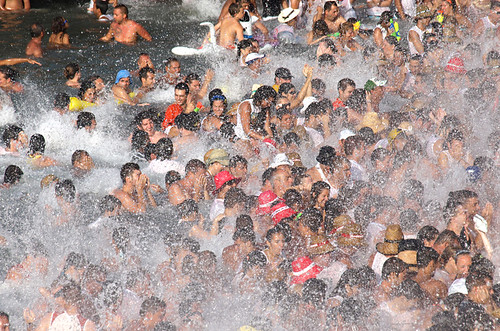 Tenerife Weather 4 to 10 July
Once again we spent part of the week elsewhere, sweltering in Madrid where oppressive temperatures of 38C made us realise exactly why so many Spanish mainlanders head to the near perfect climate of the Canary Islands in the summer. Returning to Tenerife the weather felt wonderfully fresher, even though there was an alert in place for high temperatures here. We just missed an alert for high winds and rough seas, although the fact that everything on our terrace was exactly where we left it suggested high winds didn’t affect our part of the north of Tenerife (Orotava Valley and Puerto de la Cruz). From Thursday to Sunday it was simply very hot and sunny. Unfortunately this is the time of year when forest fires are most likely. Two broke out towards the end of the week, one in La Esperanza and one in La Victoria. Thankfully both were brought under control quickly.

Weather Forecast for Tenerife 18 to 24 July
Overall it looks like it should be mainly a very hot and sunny week across Tenerife. There could be blip midweek when there’s a rise in temperatures on Wednesday which could lead to thunderclaps and even showers in some areas.

Weather in South Tenerife –  It should be another sunny week with only some a few fluffy clouds making an appearance now and again. Shade temperatures should stay between 28 and 30C most of the week except for a hike to 32C on Wednesday.

Weather in North Tenerife – It should be mostly sunny with only some light cloud. Shade temperatures should hover around 27/29C all week.

Weather in East Tenerife –  The outlook is slightly different for Santa Cruz and the east where it will be sunny every day but there could also be cloudy spells from Wednesday onwards with a chance of showers as well (5-80%), especially on Saturday. Temperatures start the week at 24/26C but will drop slightly to 23/24C between Friday and  Sunday.

Weather in the Mount Teide Crater – It should be sunny In Teide National Park and on the summit of Mount Teide apart from Wednesday and Thursday when there could be cloud, showers and even a thunderstorm. Temperatures should hover between 16 and 20C in the crater and 10 and 13C on the peak of Mount Teide.

The Tenerife Weather This Time in 2015
What happened this time last year? ‘… In the south and south west of Tenerife it should be another hot and sunny week with a rise in temperatures midweek. The north and the east could see a couple of days where there’s a mix of cloud and sun and even the possibility of showers over the weekend.’

Pic: How to keep cool on a hot July day on Tenerife .