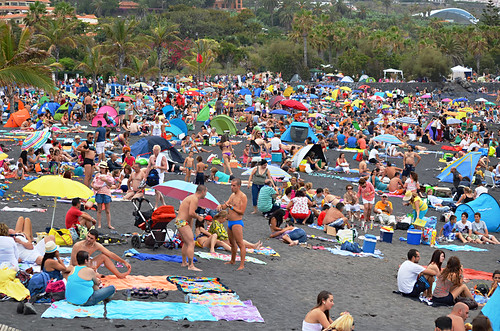 Weather Forecast for 15 to 21 June
We’ve been hiking and cycling in Austria and only arrived back on Tenerife on Saturday night. After a wet last few days in Austria, the full on sunshine we awoke to on Sunday was very welcome. By all accounts the week had seen plenty of sunshine across Tenerife but with a few cloudy spells as well, especially earlier in the week. More or less typical June weather.

Weather Forecast for Tenerife 22 to 28 June
Midsummer week should be mainly a sunny one everywhere on Tenerife, with only occasional cloud. It should be a perfect night for beach parties on Midsummer’s Eve. There is a slight chance of light rain everywhere towards the end of the week, but if they do arrive it’s likely to be the hills which enjoy the spring showers. There are signs there could be a heatwave at the weekend as temperatures are predicted to jump by a few degrees on Sunday.

Weather in South Tenerife –  It should be mainly sunny, with only some light cloud on a couple of days. Temperatures should stay between 22/24C for most of the week, but will jump to 27C on Sunday. There is an outside chance of light showers towards the end of the week (5-10%).

Weather in North Tenerife –  After a mix of cloud and sun on Monday, it should be a similar pattern in the north with mainly sunshine throughout the rest of the week, again with occasional light cloud. Like the south there’s a slight chance of showers over the weekend (5-20%). Temperatures start the week at 24C, dropping slightly midweek before rising to 24C on Sunday.

Weather in East Tenerife –  The same as the north except there shouldn’t be any cloudy spells on Monday. Sunny all week.

Weather in South West Tenerife – It’s sunshine all the way in the south west with only a 5% chance of showers on Friday. Temperatures will stay around 24/25C all week before climbing to a blistering 29C on Sunday.

Weather in the Mount Teide Crater – It’s blue skies all week in Teide National Park, apart from the possibility of some cloud at crater level on Friday afternoon. Temperatures should hover between 12 and 15C in the crater and 6 and 9C on the summit of Mount Teide. There will be strong winds on the summit on Monday and for part of Tuesday which could affect the running of the cable car.

The Tenerife Weather This Time in 2014
So what happened this time last year? It was a hot and sticky week with some cloud on a couple of days on both sides of the island and even some light rain in the north.