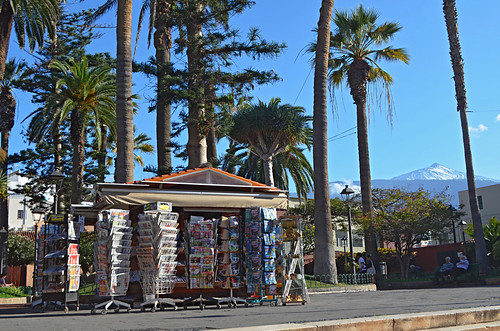 Tenerife Weather 4 to 10 April
What can we say about the weather last week, it was odd. In a way it did what was predicted, there was cloud, sun, wind and some rain across Tenerife… but it was very localised. Whilst trees were blown over in Anaga and flights from Tenerife Norte were disrupted midweek due to a thick blanket of cloud, other parts were enjoying warm and sunny weather. It was one of those weeks which perfectly illustrated why it’s misleading and simply inaccurate to use the weather readings at Tenerife Norte Airport as a measure for the rest of the north of Tenerife. Twice on Wednesday we left the Orotava Valley in sunshine to arrive at a wet airport where visibility was virtually nil. In reality, despite yellow level weather alerts for wind and choppy seas, it was actually a much sunnier and warmer week than expected in many coastal areas. Sunday rounded off the week in a gloriously hot and sunny fashion.

Weather Forecast for Tenerife 11 to 17 April
The forecast is looking much the same as last week with a mix of sun, cloud and showers with not a great difference on any coast. The south west might be slightly brighter but there’s not a lot in it. When this is the case it usually means high cloud which robs Teide National Park of its clear blue skies as well and sure enough, cloud and rain is predicted on high as well. Possibly the most interesting thing about the weather next week is that there could be more snow on Teide from midweek onwards.

Weather in South Tenerife –  The week should start warm and sunny. From Tuesday through to the end of the week there could be a mix of cloud and sun with a chance of showers (5 – 75%). Shade temperatures start the week at 22C dropping to 19/20C from Tuesday till Sunday.

Weather in North Tenerife –  Although the sun should shine every day, it looks like cloud will dominate this week. There’s also the possibility of showers every day (5 – 90%). Shade temperatures start the week around 20/21C dropping slightly to 17C midweek  before rising to 19/20C for the weekend. There’s a yellow weather alert for choppy seas on Monday.

Weather in East Tenerife –  Exactly the same as the outlook for the north except there’s no weather alert for wild seas.

Weather in South West Tenerife – The pattern for cloud and sun even affects the south west although there could be less grey clouds during the week than in all other coastal areas. Temperatures should fluctuate between 19C and 21C all week. Like everywhere else there’s a chance of showers all week (5-70%).

Weather in the Mount Teide Crater – It’s the same picture in Teide National Park with a mix of sun and cloud all week with showers also forecast for every day at crater level. Wednesday and Thursday could be quite grey and dreary. Even the summit of Mount Teide won’t escape the cloud this week and that rain at 1800m is predicted to turn into snow higher up Teide’s slopes with show showers forecast from Wednesday afternoon onwards.  Temperatures should hover between 7 and 10C in the crater and -1 and 2C on the peak of Mount Teide. Strong winds are also predicted on the summit for Wednesday and Thursday night as well as Saturday afternoon which might affect the running of the cable car.

The Tenerife Weather This Time in 2015
So what happened this time last year? ‘Not as sunny a week on Tenerife as expected with more cloudy spells than anticipated. There was still sunshine most days but it wasn’t as extensive as predicted.’

Pic: A beautifully hot and sunny end to the week.

The Addictive Pleasure of the Post-Hike Spa

Freshly showered, we sank into the hot Jacuzzi, pushed the white button and sighed audibly as the water jets began to gently pummel our sore calves, feet and lower backs. […]