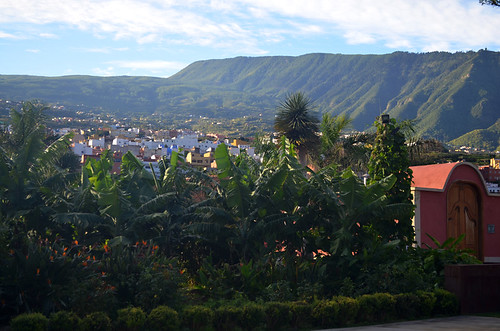 Weather Forecast for Tenerife 24 to 30 November
The forecasters got it right, even if the weather was quite a bit more severe than expected. A decent start to the week deteriorated by the weekend with red and orange level weather alerts across all of the Canary Islands. The wind was the biggest problem with gusts exceeding 100kph in places. Strangely a couple of areas escaped seriously windy weather, the lower Orotava Valley, including Puerto de la Cruz, in the north and the coast around El Médano in the south east where webcams showed people sunbathing and in the sea whilst further south along the coast palm trees were straining in the wind. Some areas experienced rain, but not excessive. The other big weather problem was with coastal conditions. In some northern areas waves of over 20 feet lashed the shoreline. All in all a quite horrible end to November on Tenerife, even though the sun and calmer weather returned for Sunday.

Weather Forecast for Tenerife from 1 to 7 December
Unfortunately the pattern for the first week of December on Tenerife looks much the same as what we experienced during November – a mix of cloud, sun and rain with temperatures starting the week warm but dropping as the week progresses. There should still be plenty of sunshine about but the weekend could end on a grey note, apart from on Mount Teide where there could be more snow.

Weather in South Tenerife – A mix of sun and cloud at the start of the week becomes more cloud than sun from Wednesday and a 5-70% chance of rain every day. Thursday afternoon till Sunday looks particularly grey and gloomy. Temperatures start the week around 24C dropping to 17C for the second half of the week.

Weather in North Tenerife – It’s a slightly brighter outlook for the north, although there will be a mix of sun and cloud every day as well apart from Saturday which just looks gloomily overcast. There’s also the possibility of rain every day (20-90%). Temps start the week around 21C, dropping to a coolish 16C for the weekend.

Weather in South West Tenerife – The forecast for south west is more or less the same as that of the south with a mix of sun and cloud for most of the week and a very cloudy Friday and Saturday. Like everywhere else, rain is likely at some point most days (5-70%). Temperatures also match those of the south.

Weather in the Mount Teide Crater – The sun will shine every day in Teide National Park but there will also be rain in the crater and snow on El Teide’s slopes throughout the week at times. Rain/snow is expected for Monday afternoon/Tuesday morning, Wednesday afternoon/Thursday morning and from Friday night over the weekend. There will be strong winds on the summit throughout Monday but these will ease from Tuesday.  Winds in the crater are at normal levels throughout the week until Saturday night when they’ll pick up and actually be stronger than on the summit. Temperatures in the crater will range from 5 to 10C, and on the summit of Mount Teide between 3 and -1C.

Pic: Midweek and north Tenerife was looking lush and lovely.