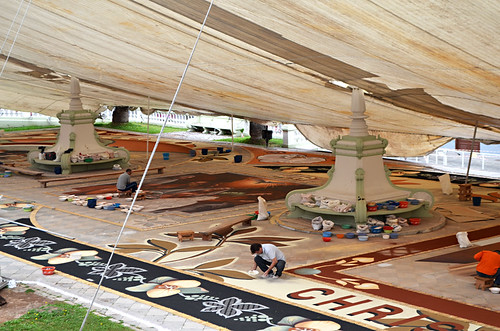 Weather Forecast for 1 to 7 June
It turned out to be not a great week across Tenerife with temperatures dropping, a lot of cloud and some light rain; one of those rare times when people coming from Britain left better weather at home. Although some areas did enjoy sunny periods, it was generally the sort of weather we expect in May, designed to dampen down the island one last time before summer. Maybe it was just a bit late this year.

Weather Forecast for Tenerife 8 to 14 June
In theory it should be a week with plenty of sunshine in most places, but also with cloudy spells during the second half of the week when there could also be light showers. Temperatures start the week warm enough but dip to low 20s for most of the week, a bit on the low side for this time of year. For anyone planning on making the trip to see the La Orotava Corpus Christi flower carpets on Thursday the outlook is for a sunny day.

Weather in South Tenerife –  The week should start sunny and warm, but the second half will see a mix of cloud and sunshine with a 15 to 60% possibility of showers from Thursday onwards. Temperatures start the week at 24C but dip from Tuesday, staying at 20/21C for most of the week.

Weather in North Tenerife –  There should be a similar pattern in the north with mainly sunshine till Thursday. There will be a mix of cloud and sun between Thursday and Thursday when there will also be a 5 to 40% chance of rain. Temperatures start the week at 22C but also dip from Tuesday, staying between 19/21C for the rest of the week.

Weather in East Tenerife –  Monday, Tuesday and Thursday should be sunny; Wednesday and Saturday should see grey clouds with sunny spells whilst Friday and Sunday will be a mix of sun and cloud. There’s a 10 to 35% chance of showers over the weekend. Temperatures start the week at 23C but like everywhere else dip from Tuesday to mirror those of the north.

Weather in South West Tenerife – Looking the best bet for sunshine with hardly a cloud till Friday and then a mix of sun and cloud over the weekend when there will be a 10 to 35% chance of rain. Temperatures should be 25/26C on Monday and Tuesday, then 21/22C for the rest of the week.

Weather in the Mount Teide Crater – Although the sun will shine every day, there could be cloudy spells in Teide National Park from Tuesday onwards with some rain from Thursday onwards. On the summit it will be clear for most of the week with only Thursday morning and Saturday afternoon having cloudy spells. There is a possibility of rain on Saturday. Temperatures should hover between 10 and 12C in the crater and 3 and 5C on the summit of Mount Teide. The biggest problem could be strong winds at the peak from Wednesday to Friday which may affect the cable car.

The Tenerife Weather This Time in 2014
So what happened this time last year? Mainly sunny in the south with cloudy spells and some light rain during the second half of the week in northern and eastern areas. Not that much different to the outlook for the coming week, although temperatures were a bit higher.

Pic: The carpetmakers creating their sandy masterpiece in La Orotava. The canvas covering protecting the tapestry came in useful on one day last week.