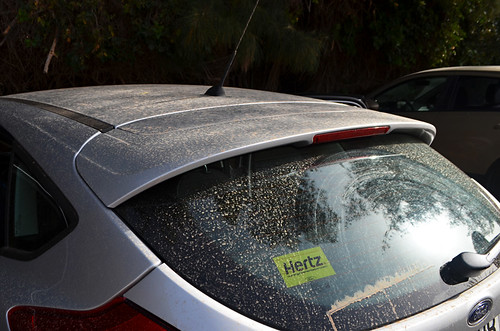 Weather Forecast for 10 to 16 August
We said it was going to be a bizarre week, but we had no idea just how bizarre. A freak combination of weather fronts brought sandy rain, wind, thunder and a spectacular lightning show to most of the Canary Islands, especially from Gran Canaria westwards. Being on Fuerteventura between Tuesday and Friday, we only experienced the fringes but from Spanish press reports and social media comments it appeared the south east and the metropolis area took the brunt on Tenerife. Some flights were diverted from Tenerife Sur airport and a lightning strike knocked out a guidance system at Tenerife Norte. By the time we landed at a sunny and calm Los Rodeos on on Friday afternoon, you’d never have known the weather had been anything less than perfect.
Although it’s rare to see weather like this in August, it’s not unknown. Apparently the same thing happened in 2005.

Weather Forecast for Tenerife 17 to 23 August
At the moment it’s looking like we have a far better, and more, settled week in store. There’s still going to be cloudy spells and a chance of showers, especially during the first half of the week. But it should be mostly sunny and warm, with the oppressive heat calming down to leave us with the sort of temperatures that has Spanish mainlanders swapping their towns for these shores at this time of year.

Weather in South Tenerife –  The week will start with a mix of cloud and sun before the cloud more or less says ‘adios’ from Wednesday afternoon, leaving a sunny second half to the week. There will be a 5-50% chance of showers between Monday night and Wednesday and an outside chance on Friday and Saturday, but we’re probably talking spits if anything. Temperatures will fluctuate between a very pleasant 25 and 28C all week.

Weather in North Tenerife –  It will be a sunny start to the week in the north with Tuesday and Wednesday morning seeing a mix of sun and cloud. Wednesday afternoon and Thursday will be mainly sunny whilst the weekend will be a mix of sun and cloud. There’s a 5 to 75% chance of showers between Monday night and Wednesday morning with a 15 to 55% possibility of rain over the weekend. Temperatures will start the week at 26C and finish around 22/23C.

Weather in East Tenerife – After a sunny Monday, Tuesday will see a mix of sun and cloud; Wednesday will be cloudy with sunny spells; Thursday mainly sunny, Friday sun and cloud and the weekend could be cloudy. There’s a 5 to 75% chance of showers between Monday night and Wednesday morning with a 15 to 55% possibility of rain over the weekend.

Weather in South West Tenerife – Apart from Monday and Wednesday morning it should be a mainly sunny week in the south west of Tenerife. Like everywhere else, there’s a chance of showers at the start of the week (5 to 45%) and on Friday (5%), but it’s looking like a sunny week although there could be a greater shift in temperatures – ranging from 23 to 29C.

Weather in the Mount Teide Crater –  Although the sun will be about every day it could be another week where Teide National Park sees rain on most days. Mornings and the weekend look best bet for sunshine. From Friday onwards the chance of rain should disappear. The summit of Mount Teide fares better with only Thursday and Friday afternoon seeing cloud interrupt the sunshine. Temperatures should hover between 13 and 16C in the crater and 6 and 11C on the summit of Mount Teide.

The Tenerife Weather This Time in 2014
So what happened this time last year? It was a sunny and very hot, humid week with a light calima bringing a haze to the scenery.

Pic: Calima car after the rain on Fuerteventura.

Weather Forecast for Tenerife from 28 March to 3 April

It’s looking like it might be quite an unsettled week with a mix of sun, cloud and rain forecast for just about everywhere. There could be showers in all parts every day although… […]