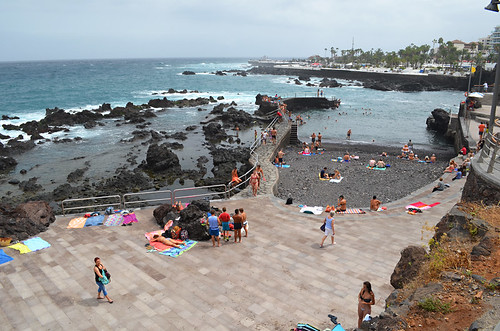 Weather Forecast for 3 to 9 August
It was a bit of a bizarre week as far as weather was concerned. It was hot and there was sunshine but across the island it was occasionally masked by a strange mix of calima and misty cloud – a result of a hot calima from Africa facing up to the cooler Trade Winds which keep the island’s temperatures mostly bearable in summer months. This also resulted in some rainfall in places. Where we are between Puerto de la Cruz and La Orotava, we only saw a couple of spells of light rain, more like drizzle. The clashing of different types of weather system also resulted in quite windy weather in places, which made it feel cooler than normal, mainly at night. In the north, where the wind brought by calima isn’t felt as much, we sat out on Saturday and Sunday night, candles lit, enjoying temperatures of 24C at midnight.

Weather Forecast for Tenerife 10 to 16 August
Unfortunately it looks like an even more bizarre week with a yellow weather alert for heavy rain on Monday affecting all of Tenerife as well as Gran Canaria, La Palma, La Gomera and El Hierro. The alert lasts from 6am on Monday until midnight, although meteorologists still aren’t entirely sure how much the islands will be affected. From then on it’s going to be a week with a lot of cloudy spells and a chance of rain every day, with Friday looking most likely candidate for any decent spells of rain. Whilst this isn’t good news for holidaymakers, it would serve to keep the countryside damp whilst pilgrims are making their way across the island to Candelaria this week. On the plus side, there should still be plenty of sunshine and it will be hot.

Weather in South Tenerife –  Although the sun should shine every day, a lot of cloud is predicted with Monday, Thursday morning and Friday looking cloudiest. There is a 5-75% chance of rain throughout the week, with a yellow weather alert in place for heavy rain on Monday. Temperature will be around 30C for the first half of the week, dropping to a nicer 26/27C over the weekend.

Weather in North Tenerife –  A similar picture to the south in terms of the mix of sun and cloud with a 5-80% possibility of rain throughout the week with a yellow weather alert also in place for Monday.. Temperatures start the week at 27/29C dropping gradually as the week goes on to settle around 23/24C in the shade over the weekend.

Weather in East Tenerife – Again a similar pattern to the north and south except there might be slightly more sunshine. The chance of rain and temperatures mirror the prediction for the north. There is also a yellow weather alert in place for Monday.

Weather in South West Tenerife – The same as everywhere else with a 5-80% chance of rain through the week and a yellow alert for Monday. It will be an extremely hot start to the week with shade temperatures of up to 34C but things will become more bearable as the week progresses with the weekend seeing temperatures of around 27C.

Weather in the Mount Teide Crater –  Heavy rain is predicted in Teide National Park on Monday and the rain could continue all week with Friday experiencing quite heavy rain as well. On the plus side, after Monday there should be plenty of sunshine as well, except for Friday. Temperatures should hover between 14 and 19C in the crater and 6 and 10C on the summit of Mount Teide.

The Tenerife Weather This Time in 2014
So what happened this time last year? It was more or less wall to wall sunshine in the south and south west with the north and east having a mix of sun and cloudy spells and some light drizzle in places.

Pic: Most of our week was spent working at home, so the only photos this week are from the new San Telmo sundeck in Puerto de la Cruz. Dark, misty cloud all around but still enough hazy sunshine for sunbathing. Strange weather.

Why You Need Directions for Walking in Tenerife

Tenerife offers fantastic walking routes through a dramatic scenery and sometimes demanding landscape. Despite welcoming millions of tourists to its resorts each year, much of Tenerife is wild and untameable… […]