We knew it was going to be an unsettled few days weather-wise.

The week before had been wall to wall sunshine for the inaugural Tenerife Walking Festival but two weeks later, when we were meeting up with a colleague from the UK to check out walking routes, was promising to be considerably less accommodating. Typical.

We planned to take in a fair spread of routes, beginning in the Anaga Mountains and then moving south and working our way up to Teide National Park. We were fairly confident that, once we got high enough and into the middle of the week, we could climb above the clouds and into blue. It was the Anaga walk that was worrying us. We planned to walk from Cruz del Carmen to Chinamada, a route that is one of our favourite walks on Tenerife and that deserves to be showcased in good weather. Saturday was the only day we could fit the route into a packed itinerary and luckily, that was shaping up to be the best day in terms of sunshine quotient and a small likelihood of rain. 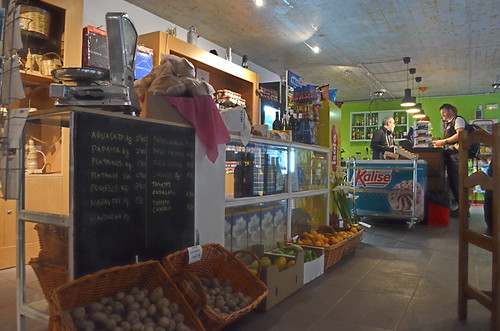 It’s fair to say that when we arrived in Cruz del Carmen in cold, damp cloud and a threat of drizzle looming, we were somewhat disappointed. Hoping the cloud may lift, we popped into the visitor centre to check out their latest additions and browsed the shelves of the La Gangochera café/bookshop that now tempts visitors with scrumptious looking cakes, traditional food products and a great selection of maps and reading materials, in Spanish, German and English. But when we emerged, the cloud was obstinately still there. Finally, we made our way to the start of the path and began our descent into the forest. 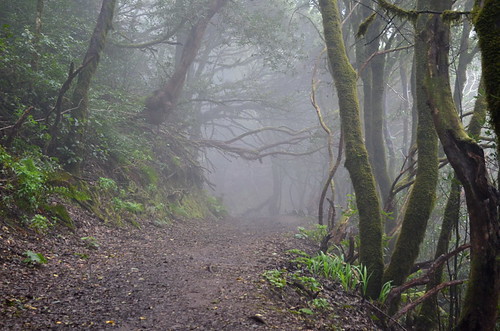 Like the soil equivalent of a snowball, the mud clinging to the soles of our boots grew thicker at every turn in the path until our feet felt considerably heavier than when we’d set off. In the dank depths of the forest, the clouds didn’t mar the experience, if anything they enhanced it, creeping silently through the lichen-drenched boughs of the ancient laurels. On the coast of Punta del Hidalgo, far below, we could see the sunshine bathing the cliffs. All was not lost. 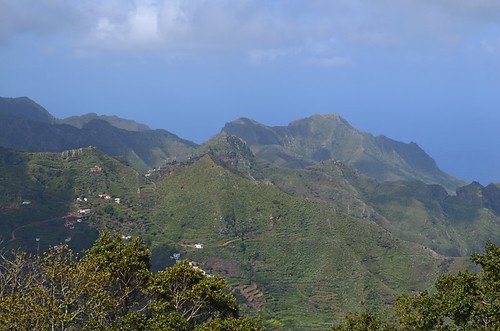 As suddenly as we had been swallowed up by the forest when we began, we emerged from its sombre, spore-scented air and stepped into the light. At the edge of the forest, clouds of vapour rose from the dense canopy coating the sheer faces of ravines, drifting in columns between the serrated layers of peaks that rose skyward, the red earth terraces of those closest to us illuminated in sunshine. It was a scene of almost Equatorial splendour and one that held all three of us in its awe.

Now bathed in the warmth of the sun, we continued our journey towards the troglodyte hamlet of Chinamada, traversing a wide ridge from which short gaps in the foliage afforded tantalising glimpses of the fertile valley and shimmering ocean beyond. 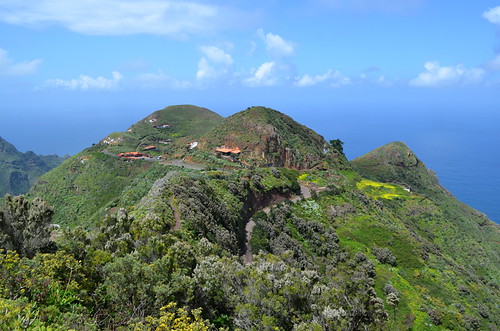 Emerging onto the top of the escarpment, the full glory of the Anaga Mountains shone before us. At our feet, a narrow tarmac road ended in the tiny settlement of Chinamada where we could see a group of walkers enjoying their picnic lunch in the sunshine of the red-roofed plaza. Surrounding the village, a tapestry of shades of green drifted down the valley, our eyes drawn to patches of yellow flowers that reflected the sun in a blinding haze. And behind this idyllic composition, the cornflower blue of the Atlantic Ocean provided the perfect contrast to nature’s study in green.

Returning through the forest to Cruz Del Carmen, the cloud once again descended and cloaked the landscape in a damp shawl. But it didn’t matter, the weather gods had done their job and now they could kick back and leave the clouds to play. We’ve said it many times, the Anaga Mountains represent Tenerife’s most spectacular landscape for hikers, and when you’re walking them in sunshine, nothing else compares.

All images taken from the Forest to Caves walk

This route is one of our Stepping Back in Time Anaga walking routes included in Real Tenerife Island Walks PDFs, available for immediate download at just €9.

Weather Forecast for Tenerife from 2nd December to 8th December

I wish I could bring you better news but it isn’t looking like it will be a great week on Tenerife. Rain and cloud is predicted for every day across the island… […]