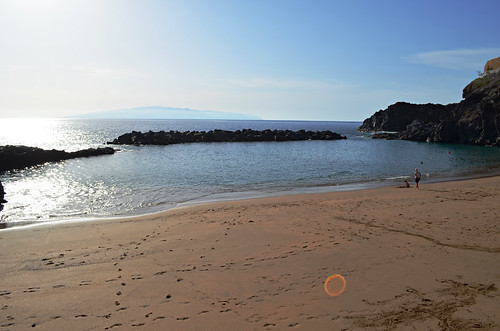 Tenerife Weather 11 to 16 October
It turned out to be a lot sunnier than predicted with mostly warm sunny days throughout the week. There was the occasional shower in parts as predicted but they didn’t come to much at all at the coast. One of the things people tend to forget about forecasts for different parts of Tenerife is that nearly every municipality stretches from the coast to the spine of the island and most weather stations are located in the hills, so whilst it might be sunny and dry in coastal areas, things might be considerably different at 600m above sea level.

Weather Forecast for Tenerife 17 to 23 October
The outlook for the next week is for sunshine on all coasts every day but some parts will see more cloudy spells than others with the north, east and west looking just a little bit sunnier than the south. Sunday looks as though it could be a grey day with rain just about everywhere. The start of the week should be very warm with temperatures dropping a degree a day as the week progresses.

Weather in South Tenerife – Apart from a very sunny Tuesday, the rest of the week could see a mix of sun and cloud inn the south with Sunday looking quite grey and gloomy. There’s a 5 to 45% possibility of showers through out the week with Sunday looking most likely for rain (75%). The week starts very hot with predicted temperatures of 31C on Monday after which it should drop a degree day by day ending the week around 25C on Sunday.

Weather in North Tenerife – In the north there should be plenty of sunshine between Monday and Thursday, with only some light cloud. From Thursday onwards there could be some cloudy spells with the weekend looking like there could be more cloud than sun. Like the south, Sunday looks particularly grey. There’s a 45% chance of rain on Friday, rising to an 80% possibility on Saturday and a dead cert on Sunday. Temperatures start the week at 27C and then drop a degree each day all the way through to Sunday.

Weather in East Tenerife – The pattern for the east mirrors the rest of the island although Santa Cruz looks like it could enjoy more sunshine than other parts with only Sunday looking as though there could be decent cloud. Although there’s a chance of showers on Saturday (35%) only Sunday really looks likely (85%). Temperatures start the week at 27C, drop to 24/25C between Tuesday and Thursday and then drop a bit more to 21/23C for the weekend.

Weather in South West Tenerife – The south west as usual partly mirrors the south except there should be more sun throughout the week and Sunday looks like it could be a bit brighter. There’s still a chance of rain during the week and the weekend looks most likely for some rain, 35% on Friday rising to 75% Sunday. Temperatures start the week at 29C and, like everywhere else, drop a degree each day all the way through to Sunday.

Weather in the Mount Teide Crater – It could be another mixed week in Teide National Park with some cloud and even showers possible on Monday, Wednesday and over the weekend. At other times there should be plenty of sunshine. On the summit of Mount Teide it should be pretty much the same pattern. Temperatures should hover between 11 and 15C in the crater and 2 and 4C on the peak of Mount Teide.