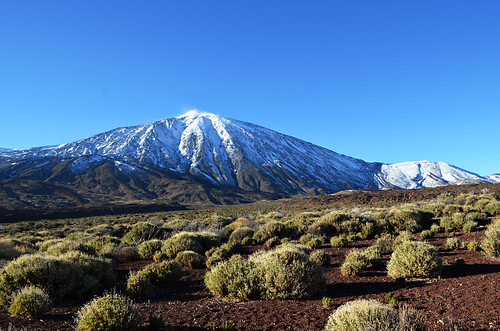 Weather Forecast for Tenerife 16 to 22 March
There was definitely a little ‘wobble’ as we mentioned last week. We’re late with the weather as we were experiencing the heart of that ‘wobble’. It certainly was one of those interesting weeks regarding the weather on Tenerife. Having experienced torrential rain, a chilly wind, sun and even snow, sometimes in the same place and within the space of an hour, it’s easy to understand why the weather can confuse those who don’t know the weather patterns on the island at various times of the year. This, subsequently, can lead to conflicting reports. The reality is there was some fabulous weather last week and there was some weather where it seemed like the end of the world was nigh. In between was down to personal perspective… which can also vary quite bizarrely.

Weather Forecast for Tenerife 25 to 29 March
It should be a mainly sunny week everywhere. The south and south west are particularly looking good, whereas the north and east should experience some cloudy spells, moreso in the east. Temperatures are also more stable with not a great difference on any coast, although the south and east will experience a brief dip midweek.

Weather in South Tenerife – A sunny, dry week with temperatures starting at 20C, experiencing a dip on Wednesday (17C) but rising again from Thursday to end at 21C.

Weather in North Tenerife –  Mostly sunny with some clouds and a slight chance of rain (5-35%). Temperatures don’t vary as much as the south, starting at 19C, with a slight dip on Wednesday (17C) before rising to a better 20C for the end of the week.

Weather in East Tenerife –  Similar to the north except for more cloud on Thursday and Friday. Temperatures also match those of the north.

Weather in South West Tenerife – The same story as the south except it should be a degree or so warmer.

Weather in the Mount Teide Crater –  It still not completely clear skies in Teide National Park, there could be some cloud at crater level until Friday with possibly showers on Thursday afternoon. On the summit it should be clear skies all week. Temperatures are showing signs of rising, 5C to 12C and -1C to a balmy 4C on the summit.

Pic: The snowfall on Mount Teide wasn’t quite finished for the season.