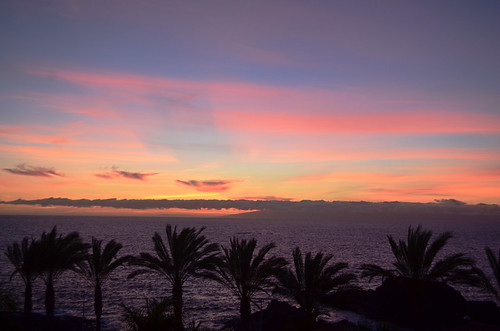 Weather Forecast for 8 to 14 February
Considering it was carnival week, the weather wasn’t bad at all with plenty of sunshine although there were also a lot of cloudy spells across Tenerife. It’s that time of year when the weather confuses people who don’t understand Tenerife’s multi-personalities in February/March. We left a grey Puerto de la Cruz on Friday afternoon, crossed through some bleak, wet weather near El Tanque and emerged into sunshine at Santiago del Teide before dropping under cloud again for the afternoon at Costa Adeje. On Sunday we left a cloudy Costa Adeje, emerged into sunshine at Santiago del Teide and stayed in the sun all along the north coast. But the sun disappeared mid afternoon and some rain fell, as predicted, on Sunday evening. In between, Saturday was red hot in the south.

Weather Forecast for Tenerife 15 to 21 February
The week that winter finally arrives on Tenerife, which is a shame as it’s also the half term holidays in Britain. The sun should shine every day in most places but there will be a lot of cloud and next weekend looks like a rainy one. There’s a weather alert for high winds, especially in the south, east and west. But they shouldn’t be as severe at coastal level. Mount Teide could be out of bounds for part of this week with very high winds, snow and unbelievably cold weather forecast.

Weather in South Tenerife –  Monday to Wednesday should be mainly sunny with only some light cloud. Thursday to Sunday could be mainly cloudy but with sunny spells each day. It looks almost certain there will be some rain next weekend (40-95%) with Friday and Saturday most likely candidates for showers. Temperatures start the week around 23C but drop quite significantly from Wednesday to hover between 15 and17C in the shade for the rest of the week. There is an orange level weather alert for wind on Monday, dropping to yellow on Tuesday. There’s also a yellow alert for choppy seas for the same days.

Weather in North Tenerife –  Although the sun should shine every day it could be a week of mainly cloud with sunny spells in the north and a chance of rain every day (5-95%). Like the south, the weekend could be a wet one. Temperatures start the week at 20C before dropping to 13/16C in the shade from Wednesday. There is a yellow level weather alert for wind on Monday and Tuesday. There’s also a yellow alert for choppy seas for the same days.

Weather in East Tenerife –  The forecast for Santa Cruz and the east is much the same as the north except there is no alert for choppy seas.

Weather in South West Tenerife –  It will be more or less the same as the south although temperatures might be a couple of degrees cooler at the start of the week.

Weather in the Mount Teide Crater – It should be a mix of sun and cloud until Thursday when there will be sun, cloud, rain and even snow in Teide National Park through to the weekend. On the summit of Mount Teide it could be sunny all week with only some cloud on Friday morning. But there could be snow showers overnight on Thursday and Friday. The big problem next week could be strong winds, with extremely strong winds over the weekend. There’s a good chance the cable car won’t be running for most of the coming week, so check before travelling. Temperatures should hover between 1 and 8C in the crater and -10C and 3C on the peak of Mount Teide. With the wind-chill factor the summit of Teide could feel like -24C on Friday.

The Tenerife Weather This Time in 2015
So what happened this time last year? ‘There was a switch of roles between north and south from the previous week with the south enjoying a lot of sunshine whilst the north had more cloudier spells and some rain. The weather alert for high winds didn’t really materialise at the coast.’

Pic: Sunset in the south of Tenerife.