There are a couple of popular beliefs about visiting Teide National Park to worship at the feet of Spain’s highest mountain, the slumbering Mount Teide.

One is it’s nearly always cool in the park outside of summer – a fair assessment given the air temperature at the moment is a not so sultry 2C. The other is that, like highly popular tourist attractions all over the world, it is packed to the gunwales with other people wanting to be wowed by one of the most outstanding views on the planet.

Those views are a bit like many perceptions of Tenerife itself. They’re not strictly wrong, but neither are they totally correct. They simply don’t paint the full picture. 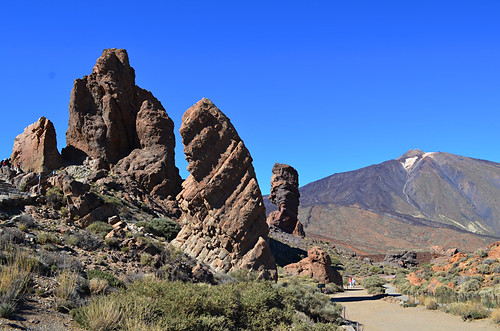 Take one of the most popular excursion spots in the park and on the island, the oddly shaped pinnacles known as the Roques de Garcia. The viewpoint (mirador) beside the rocks isn’t exactly what you’d call a quiet spot to contemplate this strange world created by nature in one of its violently abstract periods.

But two things happen within a few moments of walking along the path leading around the base of the Roques de Garcia. Almost immediately, the crowds thin and you’re not sharing the views with hundreds of  other people. A couple of minutes afterwards you realise there are beads of sweat on your brow and before you know it the jacket is off and, hey presto, it’s not quite so cool after all. 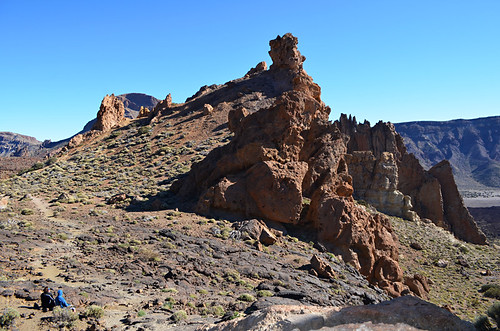 Within ten minutes, it’s difficult to believe there are thousands of other visitors sharing the park with you. It’s one of the surprising qualities of the crater, it is so immense it can swallow up an army of tourists as though they were simply an amuse-bouche.

Feeling as though you’re on your own, save for a handful of other ‘explorers’, makes the experience of being in the midst of this crazily beautiful landscape all the more special. 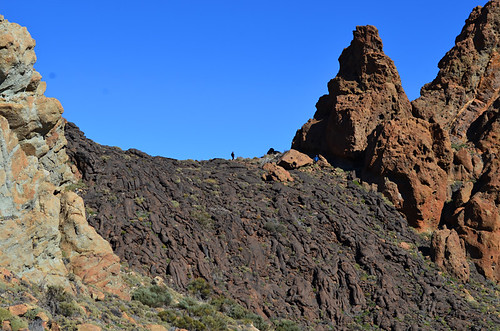 As the path winds closer to the base of the mountain, twisted rock formations hidden from view previously reveal themselves. Every so often there are openings in the rock wall to provide panoramas over the sprawling Llanos de Ucanca; one is above a lava cascade spilling through a gap in the rockface like a solidified black river.

The second half of the route, the descent to Llanos de Ucanca and a return to the mirador, reveals something else – the Roques de Garcia are even far more incredible looking from this angle. From the mirador, Roque Cinchado draws all the attention. From this spot there is a legion of unusual rocks as equally eye-catching. 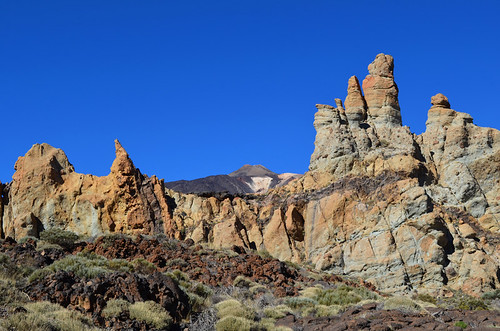 Just when you’ve overdosed in surreal rock formations you’re faced with ‘the Cathedral’, standing solitary on the flat lands below the mirador. From the viewpoint it doesn’t look anything like as impressive as it does when you stand at its base, dwarfed by its giant frame. It’s even more humbling if there are climbers on its vertical walls to create perspective and bring beads of sweat to the palms of your hands.

The climb back to the starting point reminds that the air temperature might be cold, but being 2,000m closer to the sun than at the coast means its rays are still hot. 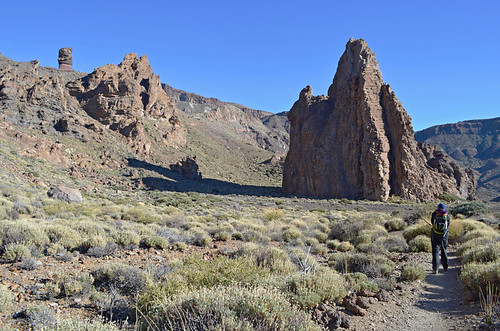 As you walk back into the throng of people clambering for a good view, some may look at you, now stripped down to your t-shirt, as though you are plain loco. Smile back. You know something they don’t. You’ve seen a side of the Roques de Garcia that most of the people who visit Teide National Park never will.

The Roques de Garcia trail is included in our Hiking Highs walking routes.

Weather Forecast for Tenerife from 21st to 27th January

The fantastic spell of January weather comes to an end this week. Although there will be sunshine there will also be a lot of cloud, especially in… […]

There are a few iconic shots on Tenerife and the view of Roque Cinchado with El Teide in the background is one of them. So much so it made it onto a Spanish banknote (in Peseta days). […]

Which is the Best Canary Island for Hiking?

Which is the best Canary Island for hiking? That’s easy, everyone knows the answer to that question; even people who come out in a rash at the very idea of… […]