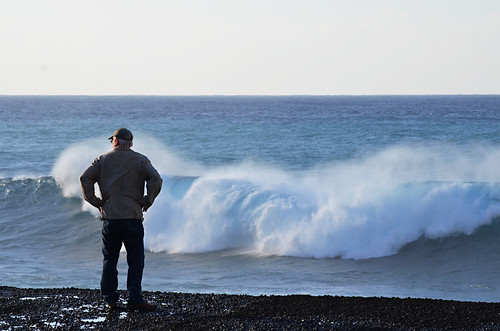 Weather Forecast for Tenerife 12 to 18 January
Once again the pattern continued in much the same way as the preceding weeks. Calima lasted a bit longer in some southern parts than everywhere else on Tenerife and all across the island there were long sunny spells mixed with some cloud and even rainfall in parts (usually at night or early morning). Temperatures remained on the low side which again was pleasant in the sunshine and cool in the shade. If you were in one of Tenerife’s more breezy areas, the cool wind kept it ‘fresh’ even in the sunshine.

Weather Forecast for Tenerife 19 to 25 January
The chances are it could be quite a cloudy and cool week everywhere on Tenerife… except Teide National Park which should be sunny, but cool. The south west (around the Los Gigantes area) looks best for most coastal sunshine, whereas it’s a week of two halves in the south; sunny for the first part, cloudy the second. In the north there could be quite a bit of cloud every day, but there should also be sunshine every day as well. Temperatures will remain on the cool side and there will be a chance of showers most days. A weather alert for high waves affects all coasts on Monday and Tuesday.

Weather in South Tenerife – The week will start warm and sunny whilst the second half of the week will see cooler temperatures, cloud and possibly showers. At the moment it’s looking as the sun will be taking a holiday between Thursday and Sunday when there will also be a 5-55% chance of rain. Temperatures will start the week at 21C but will start to drop from Tuesday and will stick at around 15/16C in the shade for the rest of the week. There is a yellow alert for high seas on Monday and Tuesday.

Weather in North Tenerife –  It looks like it will be a cloudy week in the north, although the sun should shine at some point every day. There’s also a 15-90% chance of rain throughout the week with Wednesday morning and the weekend most likely to see the heaviest rainfall. Temperatures reflect the pattern in the south, starting the week at 18C but staying at around 15C in the shade from Wednesday through to the weekend. The weather alert for waves also affects north coasts.

Weather in East Tenerife –  A mix of sun and cloud on Monday and Tuesday, cloud from Wednesday to Friday and cloud and sun over the weekend. There’s the likelihood of rain during the week (5-90%), especially on Wednesday and over the weekend. Temperatures reflect those in the north and like, everywhere else, there’s a weather alert on Monday and Tuesday..

Weather in South West Tenerife – The south west coast is looking like best option for sunshine with only Friday looking gloomy. Monday to Thursday morning should see plenty of sunshine whilst Thursday afternoon, Saturday and Sunday will see mainly cloud but there will be sunny spells. As far as temperatures go, it’s the same picture as the south and there’s a 5-55% chance of rain from Wednesday onwards. Again, there’s a weather alert in place on Monday and Tuesday.

Weather in the Mount Teide Crater –  It should be sun, sun and more sun in Teide National Park this week although some cloud could form overnight on Tuesday, Friday and Saturday bringing rain to the crater and snow to Mount Teide. Temperatures in the crater will range from 5 to 7C and between -3 and 2C on the summit of Mount Teide. There are also quite strong winds at the summit of El Teide during Monday until Tuesday morning, so the cable car might not be running during that period.

Pic: Probably not the best place to stand during an alert for high waves.