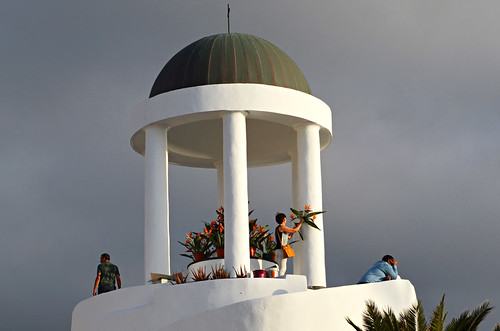 Tenerife Weather 25 April to 1 May
The pattern continued much the same as in previous weeks with a good amount of sunshine, cloudy spells and some rain, but nothing serious. High waves affected some  ferries in the south of Tenerife, but all in all it was a typical end of April, beginning of May week. We spent the second half of the week in the south of La Gomera where it was mostly hot and sunny but also quite breezy.

Weather Forecast for Tenerife 2 to 8 May
It’s no real surprise that the outlook continues to be similar with sunshine forecast for nearly every day on all coasts, but with cloudy spells and the chance of showers as well from Tuesday afternoon. It looks that most places will see some of the wets stuff at some point over the weekend. The forecast for the big 3rd of May firework display in Los Realejos on Tuesday is for an 80% chance of rain. Let’s hope it doesn’t turn out to be a damp squib.

Weather in South Tenerife –  The week could start with a sunny Monday morning and then it should be a mix of sun and cloud for the rest of the week, especially from Wednesday to Sunday when there will also be a chance of showers (5-80%). At the moment some rain is most likely at the weekend. Shade temperatures start the week at 25C and then will stick around 20/22C from Wednesday onwards.

Weather in North Tenerife –  Monday and Tuesday morning should see plenty of sunshine but after that there could be more cloud than sun each day with a good chance of showers from Tuesday afternoon. There’s a 30 to 65% chance of showers between Tuesday afternoon and Thursday, rising to 95 to 100% between Friday and Sunday. Shade temperatures start the week around 25C before dropping slightly to 22C on Tuesday and then staying around 18C from Wednesday for the rest of the week.

Weather in East Tenerife –  The forecast for Santa Cruz mirrors that of the northern coast in all ways except there could be more sunshine.

Weather in South West Tenerife – Much the same as the south with a sunny start to the week and a mix of sun, cloud and showers during the second half of the week. There’s a 5 to 55% possibility of rain between Wednesday and Friday and a 75/80% chance over the weekend. Temperatures start the week at 24/25C before settling at 21/22C from Wednesday through to Sunday.

Weather in the Mount Teide Crater – The outlook is much the same for Teide National Park with a mix of sun and cloud every day as well as the chance of light showers from Tuesday afternoon till the end of the week. On the summit of Mount Teide it should be bright and sunny all week. Temperatures should hover between 7 and 9C in the crater and -3 and 2C on the peak of Mount Teide.

The Tenerife Weather This Time in 2015
So what happened this time last year? ‘Much of the same as last week with cloud affecting some areas at the start of the week, which may even result in rainfall on higher ground. But mostly it should be hot and sunny.’

Pic: As well as being the week of the biggest firework display in the Canary Islands, crosses all over the island are decorated in honour of the 3rd of May.