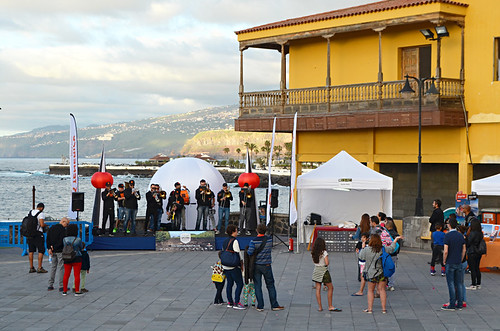 Tenerife Weather 28 March to 3 April
Generally the week started bright and sunny before cloud, rain and a cool wind in parts made midweek pretty miserable everywhere for a couple of days. Looking at webcams for all parts of  Tenerife midweek and it just looked bleak. Wet and windy beach resorts are not pretty sights and some scenes of Playa Troya in Costa Adeje looked like a wet weekend in… (place your choice of British seaside resort here). In the Orotava Valley we simply stayed indoors from Wednesday afternoon till Friday morning. Thankfully we didn’t have the wind parts of the south had, but the rain didn’t seem to let up.
The grey skies continued into the weekend in some parts but thankfully the sun returned for the weekend in Puerto de la Cruz to give the visiting walkers, on the island for the Tenerife walking Festival, a warm and sunny end to their week.

Weather Forecast for Tenerife 4 to 10 April
It’s looking like it might be another unsettled week with a mix of sun, cloud and rain forecast for just about everywhere. There should be sunny spells on most days but Wednesday and Thursday could be particularly grey and damp. The south should see less rain than the north but it doesn’t look like a great one anywhere… unless you’re a farmer.
Best area for sunshine, as it so often is, should be the south west of the island.

However, it’s got the feel of being one of those weeks where the outlook could change as the week progresses.

Weather in South Tenerife –  The week should start warm bright and sunny. There could be a dip midweek with cloud and rain on Wednesday and Thursday looking like a grey, cool, wet day. It’s short-lived and the sun, with only some cloud as company, should be back from Friday and over the weekend. There is a slight chance of showers on other days but they’re unlikely. Shade temperatures start the week at 22/23C dropping to 17/19C from Wednesday till Sunday.

Weather in North Tenerife –  It looks like there could be a north/south divide. Although the sun should shine every day, there will be a lot of cloud about as well and a good chance of showers at some point every day. This applies especially from Tuesday night onwards when, apart from Saturday, the possibility of rain is 90/100%. Temperatures start the week around 20/22C in the shade dropping slightly to 18/19C between Thursday and Saturday before dropping more to 16C on Sunday.

Weather in East Tenerife –  Much the same as the outlook for the north except Wednesday, Thursday and Friday could be particularly grey and dreary. Temperatures mirror those of the north.

Weather in South West Tenerife – The south west is the place to be this week with sunshine forecast for every day. The second half of the week will have more cloudy spells but it should still be a lot sunnier than anywhere else. There’s a slight chance of showers every day with Thursday looking most likely (60%). Temperatures start the week around 22/23C in the shade dropping to 18/19C from Wednesday through to the weekend.

Weather in the Mount Teide Crater – It’s the same picture in Teide National Park with a mix of sun and cloud all week and showers predicted for Monday night, Tuesday, Wednesday and Saturday afternoon at crater level. The only place on Tenerife which looks as though it will be basking in full sunshine all week could be the tip of Mount Teide. Temperatures should hover between 7 and 8C in the crater and 0 and 4C on the peak of Mount Teide. Strong winds on Wednesday might affect the running of the cable car.

The Tenerife Weather This Time in 2015
So what happened this time last year? ‘The week started with quite a bit of cloud about as predicted and some light showers in parts with the south enjoying more sunny spells than the north. From Wednesday it changed with the north being warm and sunny and the south having a bit more cloud and wind in some areas.’

Pic: The sun going down on the Tenerife Walking Festival in Puerto de la Cruz.

Weather Forecast for Tenerife from 28th October to 3rd November

In many ways a typical start to November on Tenerife with plenty of sunshine and warm temperatures but also the chance of rain. […]