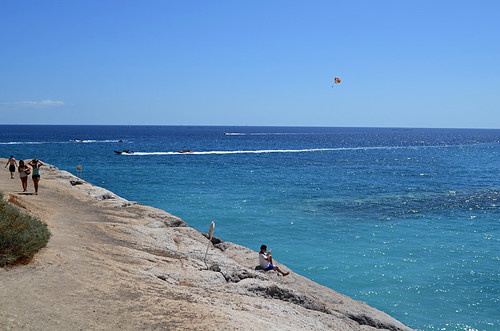 Tenerife Weather 18 to 24 July
It was a hot week across Tenerife with an orange level weather alert raised for extreme temperatures at the start of the week. Although they never quite reached the heights predicted (37C in the shade) it was still blisteringly hot during the first half of the week. Calima meant that it seemed cloudy in places with sand-filled skies causing irritation to eyes and breathing. By the weekend the Calima had eased and there was more blue in the sky.

Weather Forecast for Tenerife 25 to 31 July
The week starts with a yellow level hot weather alert for south, east and west Tenerife with temperatures expected to peak at around 34C. In the north it will just be hot. Midweek should be sunny but a bit less oppressive before temperatures rise again for the weekend when there may be some cloud and even showers in parts.

Weather in South Tenerife –  It should be another sunny week with only some a few fluffy clouds making an appearance now and again. Shade temperatures should start the week at a hot 31C prompting a weather alert to be put in place for Monday and Tuesday. Temps drop to a better 27C on Thursday and Friday before rising again to 30C for the weekend.

Weather in North Tenerife – It should be mostly sunny with only some light cloud apart from Friday and Saturday when there could be cloudy spells. The week starts very hot with shade temperatures of 29/30C but with no weather alert. From Thursday to Sunday it should be a more perfect 26/27C.

Weather in East Tenerife –  The outlook is different for Santa Cruz and the east where the first half of the week should be sunny but there could be cloudy spells between Wednesday afternoon and Sunday. There’s also a strong possibility of showers during the second half of the week (5-95%). Temperatures start the week at 24/26C but will drop slightly to 22/24C From Wednesday onwards.

Weather in the Mount Teide Crater – The week could start cloudy in Teide National Park and on the summit of Mount Teide, after Monday it should be sunny until the weekend when the cloud will roll back in bringing the chance of showers and possibly thunder and lightning. Temperatures should hover between 14 and 22C in the crater and 9 and 12C on the peak of Mount Teide.

The Tenerife Weather This Time in 2015
So what happened this time last year? ‘… By all accounts it was a hot week with a lot of sunshine and some sunny spells.’

Pic: July is a time when you don’t expend much energy if possible.