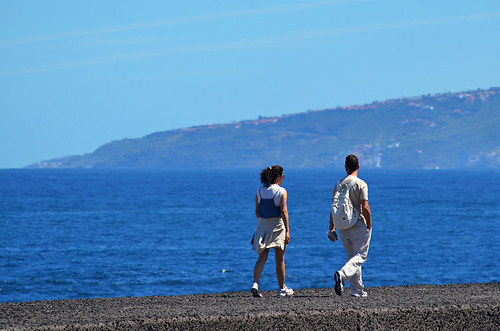 Tenerife Weather 11 to 17 April
It turned out to be mostly a beautiful week across Tenerife. The second half especially felt more like summer than April. What rain there was didn’t affect the coast much. We were certainly unaware of any decent rain in the lower Orotava Valley and had to fill the bird bath as it had dried up, something that usually happens in summer months. One of those weeks where it was a good one for both farmers and visitors.

Weather Forecast for Tenerife 18 to 24 April
Once again the forecast is for a week where there’s a mix of sun, cloud and showers with the south and south west seeing more sunshine than the north and north east. The week starts with a yellow alert for rain across all of Tenerife (Monday only) and sure enough it has just started in the north. A quick scan of webcams shows grey clouds and wet pavements in southern resort areas as well; although, Santa Cruz is looking bright and there’s evidence of breaks in the clouds in other areas. If recent patterns are anything to go by, there should be plenty of sunny spells.

Weather in South Tenerife –  The week could start with some showers (70% possibility) but there will also be sunshine and it will be warm. Mostly it will be sunny with some cloud. There’s a 20% chance of showers on Tuesday and a 5-50% chance over the weekend. Shade temperatures start the week at 23C and will fluctuate between 19/22C from Wednesday onwards.

Weather in North Tenerife –  Although the sun should shine most days, it looks like cloud will dominate this week, especially over the weekend. There’s also the possibility of showers every day (5 – 95%) with Monday and Tuesday looking best bet for rain. Shade temperatures start the week around 22C dropping slightly to 18/19C for most of the week. There’s a yellow weather alert for choppy seas on Monday.

Weather in East Tenerife –  Much the same as the outlook for the north except Saturday should be a bit brighter with some sunshine.

Weather in South West Tenerife – Although there will be cloudy spells and there’s a strong possibility of showers on Monday morning, the sun should dominate in the south west this week. There’s an outside chance of a shower on Tuesday and over the weekend (5-25%) Temperatures should fluctuate between 20C and 22C all week.

Weather in the Mount Teide Crater – It’s the same picture in Teide National Park with a mix of sun and cloud all week with a possibility of light showers most days at some point at crater level. It should be mostly clear and sunny on the summit of Mount Teide although there might be some cloud on Monday morning, Thursday and Saturday with an outside possibility of snow or rain showers. Strong winds on Monday and Tuesday could affect the running of the cable car. Temperatures should hover between 7 and 11C in the crater and -3 and 3C on the peak of Mount Teide.

The Tenerife Weather This Time in 2015
So what happened this time last year? ‘In the south it was sunny after a cloudy start to the week. In the north it was also sunny, but cloud rolled in during the afternoon on some days.’