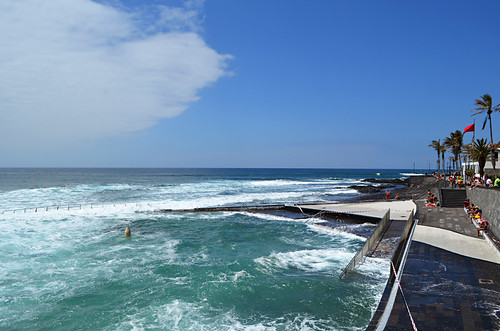 Weather Forecast for Tenerife 13 to 19 April
Not as sunny a week on Tenerife as expected with more cloudy spells than anticipated. There was still sunshine most days but it wasn’t as extensive as predicted, so impossible to say definitively that any area was ‘sunny’ or ‘cloudy’. We experienced sun and cloud in different parts of the north on some days whilst a Canarian friend who’d headed south reported similar experiences. Overall it looked as though in general the tourist areas of the south enjoyed more sunshine than the tourist area of the north.

Weather Forecast for Tenerife 20 to 26 April
After a Tuesday where there’s a mix of cloud, sun and possibly showers in most parts, it should be a sunny and warm week. Some areas might see more cloud than others over the weekend.

Weather in South Tenerife – There could be cloudy spells throughout Tuesday but after that it should be mainly sunny for the rest of the week with shade temperatures staying between
20/23C.

Weather in North Tenerife –  After a mix of cloud and sun on Tuesday morning, with a 30% chance of showers, it should be a mainly sunny week with shade temperatures of 19/20C. There might be a mix of sun and cloud on Sunday when there will be a 15% chance of showers.

Weather in East Tenerife –  It’s a similar picture in the east with Tuesday seeing sun, cloud and a 30% possibility of rain in the morning before the sun dominates for most of the week. The main difference will be over the weekend when there might be more cloud than sun and a 5-15% chance of rainfall. Temperatures will be 19/20C all week.

Weather in South West Tenerife – Like everywhere else, Tuesday morning will see a mix of cloud and sun and a 10% chance of showers. Tuesday afternoon might be cloudier than other coasts, but from Wednesday it should be sunny for the rest of the week with temperatures being similar to everywhere else (21/22C).

The Tenerife Weather This Time in 2014
Once again a year ago it was much the same as predicted for the coming week. In the south it was sunny after a cloudy start to the week. In the north it was also sunny, but cloud rolled in during the afternoon on some days.

Pic: A sunny Saturday in the north east of Tenerife.