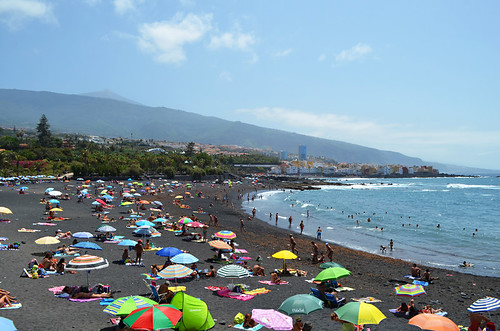 Weather Forecast for 6 to 12 July
It was a hot week on Tenerife but the heatwave which brought sticky weather was as a result of calima which meant that there was a misty haze across Tenerife on some days. Not the most pleasant of weather conditions.

Weather Forecast for Tenerife 13 to 19 July
It should be a hot and sunny week with another slight rise in temperatures midweek, but not as marked as in previous weeks. Wednesday could see cloud in most places. The week should end with near perfect temperatures on all coasts.

Weather in South Tenerife –  It should be another hot and sunny week with only some light cloud on Wednesday and Thursday. Temperatures will be around 28/30C until the weekend before dropping to a perfect 25/26C on Saturday and Sunday.

Weather in North Tenerife –  It should be mainly hot and Sunny although Wednesday could see some thick cloud roll in during the course of the day. Temperatures will start the week in the mid 20sc before rising to 27/28C on Thursday and Friday then settling back to 24/26C for the rest of the week.

Weather in East Tenerife – There will be a mix of cloud and sun at the start of the week but it should be sunny days from Wednesday onwards. Temperatures match those of the north.

Weather in South West Tenerife – Apart from Wednesday, which could see a lot of cloud, it’ll be a sunny and very hot week in the south west. The week will start hot (33/34C) but it will cool down slightly as the week progresses to reach an ideal 26/27C over the weekend.

Weather in the Mount Teide Crater – It’s sunshine and blue skies most of the week in Teide National Park, although Wednesday and Thursday mornings could see some light rainfall. Temperatures should hover between 14 and 20C in the crater and 6 and 11C on the summit of Mount Teide.

The Tenerife Weather This Time in 2014
So what happened this time last year? It was mostly hot and sunny in the south of Tenerife. In the north there were a couple of cloudy days.

Weather Forecast for Tenerife from 29th November to 5th December

A red alert stays in place for all of Tenerife for winds of up to 130kmh until 3pm when it changes to orange until midnight. There are also yellow alerts in place until midnight today for heavy rain and high seas… […]