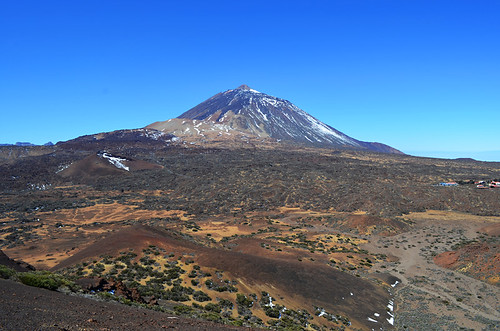 Weather Forecast for Tenerife from 7th to 13th April 2014
The weather forecast shows a sunny and warm week on all coasts on Tenerife with only a few clouds about, except for Saturday which could see more cloud than sun. Temperatures should also rise during the week to reach a perfect springtime mid 20s. There’s a slight chance of rain over the weekend. Although all looks good on the coast, signs from the mountain suggest that the weather at the weekend might not be as perfect as it seems. With high winds on El Teide from Tuesday, reaching 80km an hour by Thursday night, and the chance of snow showers resulting in a plummeting of temperatures on high, it seems unlikely that coastal areas won’t be affected in one way or another. We’ll be keeping an eye on the forecast to see what develops.

Weather Forecast for Tenerife 31st March to 6th April 2014
We were walking on Fuerteventura for most of the week (the reason why there’s been no weather update over the last couple of weeks) where we experienced quite cold and windy weather even though the sun was shining – a weather front that affected the whole of the Canary Islands. By all accounts, the weather looked similar on Tenerife with cloudy, cool spells during the first half of the week. Since we returned on Thursday evening the weather has been perfect – hot and sunny, with only the briefest cloudy spell late in the day on Saturday. Now it really feels as though spring has arrived.

Weather in South Tenerife –  It will be very sunny for the first half of the week and sunshine with a few clouds for the second half. There’s a slight chance of rain, probably in the hills, over the weekend (20/25%) but overall it’s going to be sunny with temperatures rising to a perfect mid 20s as the week progresses.

Weather in North Tenerife – The pattern for the north is similar to the south with mainly sunshine mixed with a few clouds during the second half of the week. Saturday might be more cloud than sun and there’s a 5/35% possibility of rain over the weekend. Also like the south, temperatures will rise and it will be 22C in the shade by the weekend.

Weather in East Tenerife –  The east and Santa Cruz will be exactly the same as the north although, as is often the case, the city will feel hotter.

Weather in South West Tenerife – The south west is more or less the same as the south except that Saturday, like the north and east, will be mainly a cloudy day.

Weather in the Mount Teide Crater – It will be sunny in Teide National park all week except for some cloud on Thursday and the chance of rain in the park on Saturday night turning to snow showers on the summit. Temperatures will range between 6C and 13C in the crater and -6C and 4C on Mount Teide’s upper slopes. There is also going to be extremely strong winds on the summit from Tuesday to Saturday morning so a good chance the cable car will be suspended during this period.