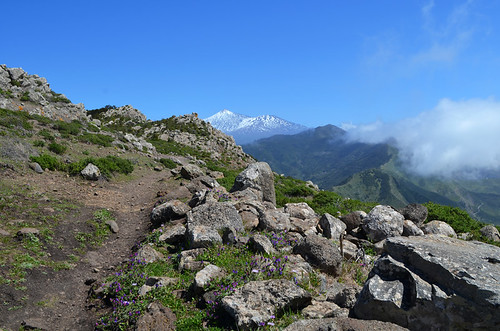 Tenerife Weather 15 to 21 March
After a week exploring walking trails on La Palma where we mostly enjoyed high temperatures and blues skies, we returned to a clear and temperate Tenerife Norte Airport on Thursday evening. Friday was warm and sunny; perfect weather for showing a friend the delights of the Teno Massif in the west of the island. After that it was a bit mixed with some rain in the night and a mix of cloud and sunny spells over the weekend in the north. It looked as though the south fared better in the sunshine stakes at the end of the week.

Weather Forecast for Tenerife 21 to 27 March
Semana Santa (Easter week on Tenerife) looks like it should see plenty of sunshine but there will be cloudy spells as well as the possibility of showers. In the north, Wednesday looks most likely for rain whilst in southern areas it’s Good Friday. A cool breeze during the second half of the week could make it feel quite nippy in the shade in all areas of Tenerife over Easter weekend. At least the religious brotherhoods parading in their cloaks and pointy hats should feel nice and cosy at when the sun ducks between a cloud.

Weather in South Tenerife –  It should be a mix of sun and cloud all week. There’s a slight chance of showers throughout the week (5-45%) but these are more likely to be in the hills and overnight. Temperatures start the week at 20/23C. The second half of the week could be a bit cooler with shade temperatures of 16/18C between Thursday and Sunday.

Weather in North Tenerife –  It’s a similar picture in the north except Wednesday could see more cloud than sun and rain is likely (55%) in the afternoon. There’s a chance of showers during the rest of the week (5-35%) but it’s likely these could be at night or early morning.  Temperatures start the week around 20/21C in the shade dropping to 16/17C for the weekend.

Weather in East Tenerife –  Almost the same as the outlook for the north except Sunday could be a very grey day. Temperatures also mirror those of the north.

Weather in South West Tenerife – Again the outlook for the south west is more of the same – after a sunny Monday it should be sun and cloud with a chance of showers (5-45%). Temperatures will be around 20/21C in the shade during the first half of the week and 17/19C for the second half.

Weather in the Mount Teide Crater – It might not be the greatest of weeks in Teide National Park with a mix of cloud and sun expected most days at crater level with showers also predicted between Wednesday and Friday. Saying that, Monday afternoon plus Tuesday and Friday morning should be cloud free. It should be sunny most of the week on the peak of Mount Teide except for Saturday morning when there might be some cloud.  Temperatures should hover between 5 and 8C in the crater and -5 and 2C on the peak of Mount Teide. It is likely to be a cold week in the park with a cool breeze causing temperatures to plummet at times so that it could feel as low as -14C on the summit. There might be quite strong winds on Wednesday afternoon and Thursday morning which could affect the running of the cable car.

The Tenerife Weather This Time in 2015
So what happened this time last year? ‘The week started spectacularly with snow in Teide National Park, and people flocking to the crater to build snowmen, resulting in closed roads. At lower levels there was heavy rain in many parts of the island and the areas that escaped the rain seemed to get quite strong winds instead.’

Pic: There was a warm and fuzzy feel that spring was in the air in the north west of Tenerife at the weekend.