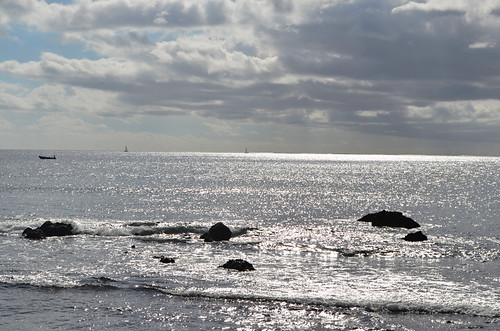 Weather Forecast for Tenerife 10 to 16 November
Friends from La Gomera were amused to see people in a hotel in Fañabe sunbathing under thick clouds, even though there were contrasting reports that the weather was glorious. On Saturday we were in sunshine in Las Galletas from midday to late afternoon whereas inland was positively black. As far as we could see the forecasters got it quite right – the week was one of a mix of cloud, sun and occasional rain, but not prolonged. It was typical November weather and not as bad as a forecast of rain most days might sound. As far as temperatures goes, on Thursday night in Puerto de la Cruz we passed a reading showing 19C at 8.30pm. At midnight it was 20C.

Weather Forecast for Tenerife from 17 to 23 November
Once again it will be a mix of sun, cloud and rain with the forecast looking the most unsettled it has been so far this November. Thursday could be unusually cool and there might be quite a bit of snow on Mount Teide where temperatures will plummet to an icy -8C. With any luck it will be similar to this week when the rain was minimal and there was plenty of sun as well, but we’ll have to see as there’s a stormy weather front nearby.

Weather in South Tenerife – It’s not really worth changing anything from last week as it’s another week of a mix of sun and cloud every day but with a greater chance of rain each day (70 to 100%). And like recent weeks, the week will start warm 26C before plummeting to 17C on Thursday then jumping up again to 20C to end the week.

Weather in North Tenerife – The situation in the north looks slightly brighter apart from Thursday which looks like a grey and wet day. On other days there should be a more sunshine than southern parts but there will also be cloud and rain at some point as well (45 to 100%). The temperature follows the same pattern as the south, juts a couple of degrees cooler; 23C at the start, dropping to an unusually low 15C on Thursday and finishing the week on 17/19C.

Weather in East Tenerife –  Same story as everywhere else; cloudy, sunny and rain (45 to 100% possibility) every day with Thursday looking worst. The temperature curve is also the same as the north.

Weather in South West Tenerife – The forecast for south west is closer to that of the north this week, with Thursday looking grim but the weekend looking slightly brighter than in the south.  There’s a 75 to 100% chance of rain every day and temperatures should start the week at 24C drop to 17C on Thursday for a day and then climb to 20C.

Weather in the Mount Teide Crater – Even Teide National Park won’t escape the rain this week. Monday and Tuesday should be sunny but after that there will be rain and sunshine in the crater for the rest of the week whilst the summit should see quite a bit of snow. There will also be high winds from Tuesday night so it’s unlikely the cable car will be running much this week.

Pic: This was a rainy day in parts of Tenerife.