When you live amidst this incredible landscape for a number of years there’s a danger you become blind to some of the things that will leave newcomers to Tenerife’s countryside gobsmacked.

We like forests and green valleys so when we get the opportunity to go walking on Tenerife we tend to opt for Anaga, Teno or the upper La Orotava Valley as first choices, forgetting that possibly the most magical of landscapes has barely a tree to its name. 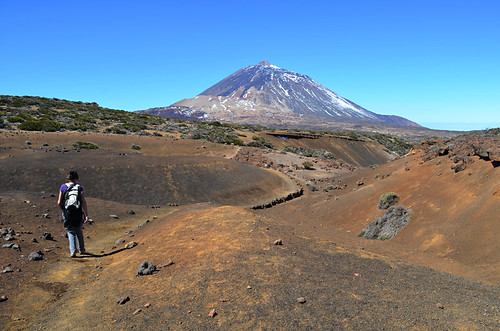 A couple of weeks ago we decided it was time to check our walking routes in Teide National Park. As well as ensuring our directions were up to date, it was a reminder that walking in the metaphorical shadow of Mount Teide is a visually thrilling experience.

It’s also an experience that can be enjoyed by people who prefer short, mainly flat (ish) walks to thigh crunching challenges.

Top walk clearly is the ascent of El Teide which, although it doesn’t require climbing ropes or anything like that, is a challenge mainly because of the effects of walking at high altitude. 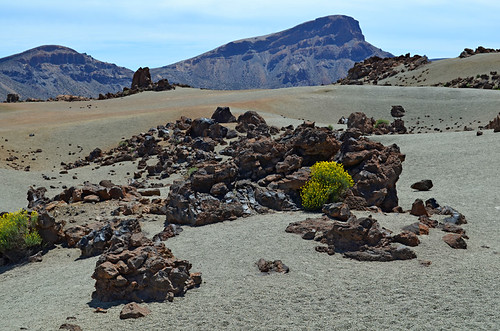 Montaña Guajara at 2718m might be El Teide’s little sister but its peak stands at an altitude that is more than double that of  Britain’s highest, Ben Nevis.

Walking in the park isn’t all about ascending peaks to touch the sky. Routes vary in length and difficulty. Although it’s the most visited place on Tenerife, Teide National Park covers an area of such epic proportions that it can absorb the masses easily. Most people don’t stray far from the point where their coach drops them off, leaving the bulk of the park free for those with an explorer’s spirit.

Trails lead into the volcanic wonderland from most of the popular spots. In minutes walkers are free from the hordes of people milling about the areas where coaches stop. There will be probably thousands of people in Teide National Park at the time the photos here were taken. The incredible landscape just swallows them up. 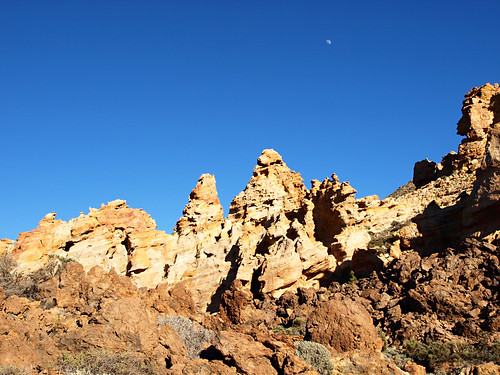 The altitude means that this wild world is often above the clouds, resulting in deep blue skies and a razor sharp visibility that intensifies every sparkling field of ebony coloured basalt, ochre swirls of pahoehoe clinging to red mountains and copper green pumice plains.

I can tell you over and over how mind-blowing this terrain is but it will never match the reality of seeing it first hand. Even after ten years our walks still involve moments when we simply have to stop and take some moments to breathe in the views – the impact of the place just doesn’t diminish over time.

During our last visit there was still snow in places, adding another surreal element – as though it needed it. White drifts sheltered under low bushes, hiding from the sun, looking completely out of place on plains that felt more like being in a desert.

Despite shade temperatures being quite cool, it was still hot and dry walking. Even in January and February, the coldest months when the snow is often thicker, we tend to find ourselves walking in tee shirts. 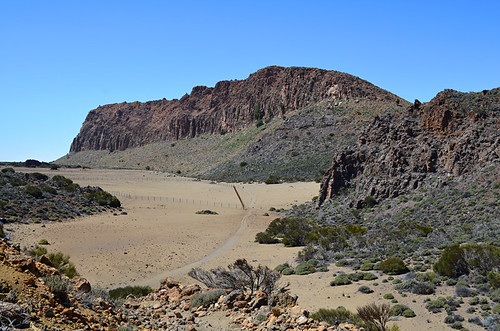 Some routes are busier with walkers than others. Generally the easier the route is, the more people follow it. We don’t include La Fortaleza in our routes at the moment because of this. It’s a route with a super pay off but there are too many people on it. This time we actually passed someone wearing wedge heels about three kilometres from the Portillo Visitor Centre. Some routes might be more accessible than others, but wearing heels on volcanic scree paths is utter madness.

I suppose I did say at the start that Teide National Park had walking routes to suit everyone.

Guided Walk to the Summit of Mount Teide