We had planned to do a really long walk, one that would take us from the pine scented splendour of Vilaflor to the drama of Teide National Park. But the weather had very different ideas.

Thwarted by a blizzard that threatened to leave us stranded and eventually closed three of the four roads into Teide National Park, our planned early morning start was frozen, dusted in snow and spat out to flounder by the side of the road. Forced to re-think our plans, we set off to do a shorter, but nevertheless substantial walk which would take us through the pine forests high above Vilaflor. Setting off, within moments the heavens opened and turned three enthusiastic and dry hikers into exceedingly wet people whose trousers were sticking to their, now cold and sodden, legs and whose enthusiasm was waning by the minute.

Taking refuge in a hot cup of coffee in a small café, we pondered what to do. 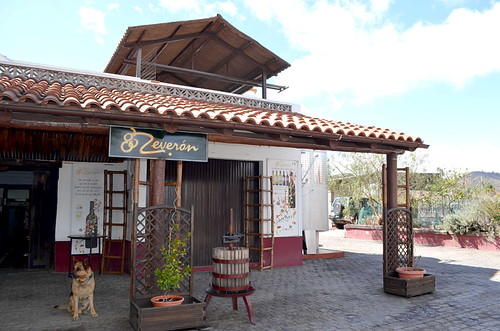 Even though the majority of the walks in our Island Walks series are under 10km (6.2 miles), we’re generally not very good at doing short walks, preferring to feel tired and happy at the end of challenging hiking days. When we re-walk shorter routes to check for any changes, we tend to pack up to three into a single day so that we still manage to notch up 18km or more. So faced with the prospect of a short walk in what was left of the day, we weren’t too keen, until it was suggested that this particular route could easily incorporate a trip to a bodega, complete with tasting.

Trousers dried, rain dissipated and anticipation restored, we set off from the plaza in Vilaflor with a renewed spring in our step. 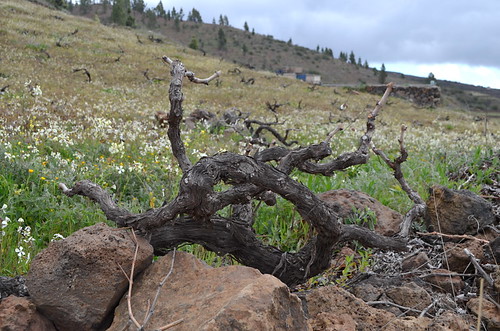 Following a cobbled path that climbed gradually into the meadows above the village, we skirted fields of old vines secreted amongst the proliferation of grasses and wild flowers that had sprung into life with the winter rains. As the clouds began to dissipate to reveal blue skies above the mountainous ridge, we traversed paths lined by dry stone walls alongside agricultural terraces. Gradually, neat rows of vines replaced neat rows of potatoes and we found ourselves at the Bodega Reverón. 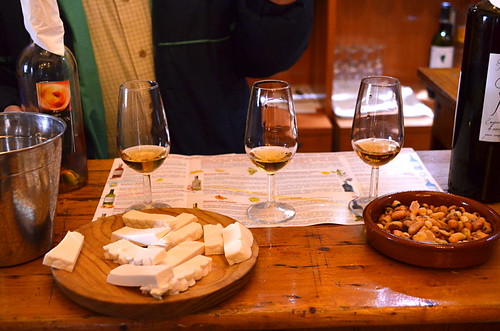 Lying 1300 metres above sea level, the vines of the Bodega Reverón are amongst the highest in Spain. A thriving family vineyard since 1947, Listán Blanco grapes dominate the annual harvest, perfectly suited as they are to the altitude and climate and to the growing conditions where the family employ organic farming methods. Following a tour of the bodega, we gathered in the small shop and tasting room to sample this year’s stable of wines. Working our way through a repertoire of predominantly white wines along with a rosé and a couple of reds, we all agreed that our favourite was a mellow Los Quemados moscatel.

After buying a couple of bottles, we retired to the table in the front courtyard to eat our sandwiches. Naturally, a chilled glass of white accompanied the picnic. By the time we were sauntering back to Vilaflor, I was very happy that our route was considerably shorter than our original plans. 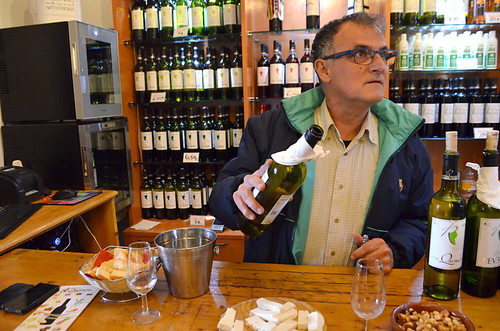 I believe things usually happen for a reason. At the time, it may not be obvious what the reason is and it certainly doesn’t always seem to be a good thing. On this occasion, the adverse weather had forced us to re-think our plans, seemingly thwarting our every effort to get the most from the time we had available. But in the long run, it was a really relaxing and enjoyable day that enabled us to try and buy some local wines produced on a family bodega, a real taste of Tenerife tradition.

I think we might have to consider adding more ‘walk and wine’ itineraries to our portfolio.

Bodega Reverón, Carratera General Vilaflor; (+34) 922 72 50 44; wines available to buy in the bodega, in Hotel Villalba and in selected supermarkets such as Al Campo.