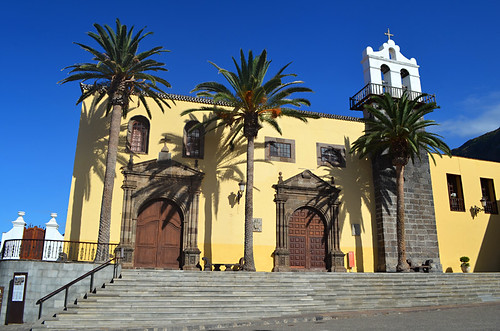 Weather Forecast for Tenerife 13 to 19 October
Everyone will be talking about the storm that hit Tenerife yesterday and quite rightly so, it was one that brought devastating rainfall to a lot of places. Prior to Sunday it was mostly a warm and sunny week after a grey start. Northern parts probably enjoyed more sunshine over the week and on Friday we were staring at intense blue skies in Garachico whilst there were reports of cloud and even some light rain in other parts. The ferocity of the rain took a lot of people by surprise.  After a long dry summer all across the island leaves the ground hard, the first heavy rains after summer are always potentially dangerous as the ground can’t absorb water fast enough and the steepness of the island sends raging rivers coursing toward the coast. From images online Santa Cruz in the east, La Laguna at 600m and places like Playa San Juan/Alcala in the south west saw the worst of the rain as torrents from the hills devastated some areas. Here, just above the north coast, we escaped with what seemed like no more than your average rainy Sunday in Manchester.

The storm also left the first snows of the season on Mount Teide, a very early appearance this year.

Weather Forecast for Tenerife from 20 to 26 October
The gloomy weather lingers about for a couple of days more and Tuesday especially looks like it will rain. With snow, wind and rain on el Teide the National Park doesn’t look the most inviting place to visit before Wednesday anyway. From then on it’s sunshine everywhere. In fact don’t be surprised to see a weather alert for a heatwave midweek. By the weekend it should be almost perfect weather – sunshine and with temperatures in the mid to upper 20s.

Weather in South Tenerife –  It’s going to be a gloomy start to the week in the south of Tenerife with mostly cloud today and tomorrow, although the sun will shine at some points on Tuesday. After that it’s mostly sunshine for the rest of the week. The chances are it will rain on Monday (possibly) and Tuesday (definitely) but after that it should be dry with only the outside chance of a shower. Temperatures will start around 25C shooting up into the 30s midweek and then settling at a very hot 28C for the second half of the week.

Weather in North Tenerife – It should be mainly a sunny week in the north with some decent cloud about on Tuesday when it will probably rain at some point, more than likely early morning. Temperatures will start the week at around a lowish 21C before rising to 29C midweek and then levelling out at 26C for the weekend.

Weather in East Tenerife –  The weather forecast mirrors that of the north except there might be more cloud about on Sunday.

Weather in South West Tenerife – Much the same outlook as the south a grey start to the week, but sunshine from Wednesday onwards. Temperatures also reflect those of the south.

Weather in the Mount Teide Crater – The weather in Teide National Park reflects conditions elsewhere with cloud and even some rain on Monday and Tuesday when there will also still be very strong winds. Temperatures in the crater will range from 10 to 20C and 1 to 4C on the summit. There will also be quite strong winds over the weekend so unlikely that the cable car will be running at either the start or end of this week.

Pic: Despite the stormy end to the week, much of last week was perfect weather.

Control of Mouflon and Rabbits in Teide National Park

Anyone with plans of walking on Tenerife in Teide National Park should be aware that some routes will be closed on Wednesdays and Fridays over the next couple of weeks. […]