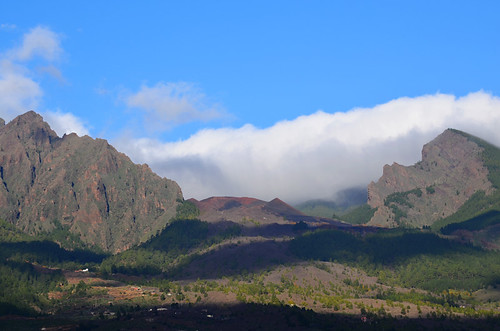 Weather Forecast for Tenerife 8 to 14 December
Returning from a bitterly cold UK on Tuesday afternoon it was a joy to step into relatively warm if not hot temperatures at Tenerife South Airport. High cloud above Mount Teide meant partial cloud cover and hazy sunshine across Tenerife. And so it stayed for much of the week before heavy rain affected parts on Saturday morphing into a sunny Sunday to end the week.

Weather Forecast for Tenerife 15 to 21 December
Still much the same weather as we’ve experienced over the last few weeks – a mix of cloud, sun and rain with temperatures starting the week warm but dropping as the week progresses. It looks as though Mount Teide will be piling on the white layers in preparation for a white Christmas as there will be snow during most of the week. With any luck, the week should end on a bright, sunny note.

Weather in South Tenerife – Again, a mix of cloud, sun and possibly rain (5-95%) all week. Temperatures start the week around 21/22C dropping to 18C by the end of the week. Friday and Saturday look like the sunniest days this week with no cloud expected.

Weather in North Tenerife – Still much the same pattern with sun, cloud and the chance of rain (between 20 and 100%) most days. Temperatures follow much the same pattern of late, starting the week at a low 19/20C and finishing at an even lower 16C. Friday looks best for a sunny, rain free day.

Weather in South West Tenerife – Much the same as the forecast for the south.

Weather in the Mount Teide Crater – A look at what’s happening on Mount Teide can sometimes give clues for conditions lower down. Cloud brings rainfall to the  crater and snow to El Teide between Monday and Thursday. However, the clouds depart from Thursday afternoon leaving clear skies from then onwards which is reflected in conditions at the coast.  Temperatures in the crater will range from 6 to 8C, on the summit of Mount Teide between 0 and -3C. Although winds aren’t particularly high, snow should put a stop to the cable car for most of the week.