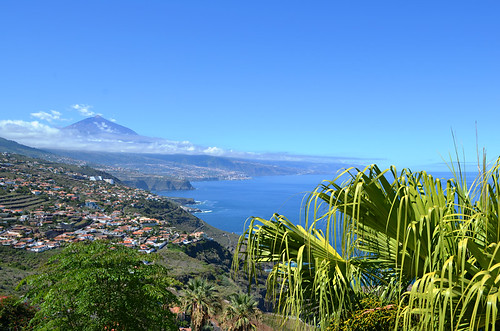 Weather Forecast for 7 to 13 September
It was almost a rerun of the previous week. Some parts of Tenerife mainly enjoyed a blisteringly hot and sunny week, whilst others experienced some cloudy periods and even rain – there were reports from the south and east of showers. In the north we mainly had a hot and sunny week, although by the weekend cloud rolled in over the afternoon.

Weather Forecast for Tenerife 14 to 20 September
The forecast is for a quite cloudy week in the south and south west with some sunny spells. The north and east should see more sunshine and less cloud. Everywhere should experience some rainfall, especially on Friday and possibly over the weekend. Again the forecast shows a hot start to the week before temperatures settle down from Wednesday.

Weather in South Tenerife –  It’s looking liked an unusually gloomy week for September in the south of Tenerife with thick cloud every day; although the sun should shine at some point, except for Saturday. There’s a 5% chance of showers but the probability increases was the week progresses with Friday looking like a definite (100%) whilst on other days it’s a 20 to 75% possibility. Temperatures start the week at 29C and drop to 22/24C from Wednesday onwards.

Weather in North Tenerife –  The outlook for the north is better with a mix of sun and cloud but no thick grey cloud forecast. There’s also the likelihood of rain with Friday looking most likely (95%). Until the weekend there’s only an outside chance of showers. Temperatures start the week at 26C and drop slightly to 22/23C for the second half of the week

Weather in East Tenerife – Mostly the same as the north but with possibly slightly more cloudy spells.

Weather in South West Tenerife –  The forecast for the south west reflects that of the south. Temperatures start the week at 27C dropping to 22/24C from Wednesday. Like everywhere else rain is a likelihood with Friday looking certain at this point.

Weather in the Mount Teide Crater –  After a cloudy Monday the rest of the week should see a mix of cloud and sunny spells in Teide National Park with rain possible at some point every day. The summit of Mount Teide should be clear except for Friday afternoon when showers are forecast. Temperatures should hover between 13 and 14C in the crater and 5 and 7C on the summit of Mount Teide.

The Tenerife Weather This Time in 2014
So what happened this time last year? Not so different it would seem. ‘There was cloud at times and rain did fall most places, but it didn’t fall for long anywhere. Once again we were out and about all around the island, and most of the time the default setting was sunny and hot. Both north and south experienced cloudy spells on different days but overall it was hot and sunny.’

Pic: Our favourite view of the north coast of Tenerife and Mount Teide last Friday lunchtime.