The trail through the Barranco San Blas beside the Sandos San Blas Resort in San Miguel de Abona has to be one of the most unusual walking routes in Tenerife.

It’s also one of the most enjoyable and surprising routes we’ve experienced in the south of Tenerife.

For a start, we had to use our room key card from the Sandos San Blas to open the access gate to the route. Using a room key to start a walk definitely had a surreal feel to it. But it set the scene nicely for what was to follow. 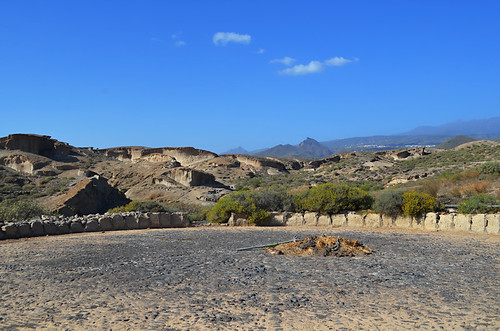 I’ve scoffed at the ‘nature reserve’ tag to this area in the past; thinking it a wee bit of poetic licence. But I was wrong. The Barranco San Blas is fascinating, unusual, educational and lots of fun.

There are a number of criss-crossing paths that follow the barranco (ravine) inland, leading to small, but intriguing attractions along the way that illustrate the past life of these parts. It’s up to you which path you follow. There are signposts, but these act mostly as guides to the route’s ‘highlights’.
Despite the hotel being full and entrance to the ‘nature reserve’ free to guests, there was not one other person on the route.

The Barranco de San Blas is narrow and not particularly deep, so there’s little chance of anyone getting lost. The route we followed was anarchic as we switched paths on a whim, when we saw anything that looked remotely interesting. 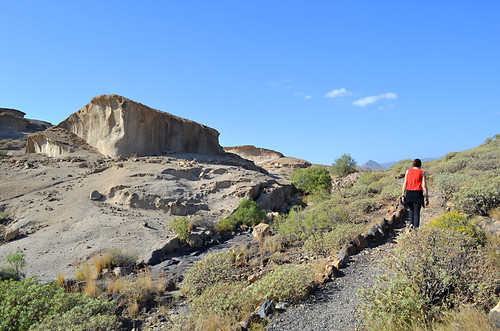 First up was a threshing circle, an era, complete with a tiny mound of straw and an old fork (which you can actually see in action at the Día de la Trilla in El Tanque). Then it was a Guanche cave with goat skin drying in the sun to add a touch of cave life authenticity.

From there, the path snaked through the creamy, jablé landscape, passing huge ragged formations shaped by the east coast breeze. Although the landscape is arid, this was tomato growing country in the not so distant past. To illustrate this, an old tomato truck lies wedged in the sand.

And so the path continues, wooden signs pointing to oddities that were once commonplace. 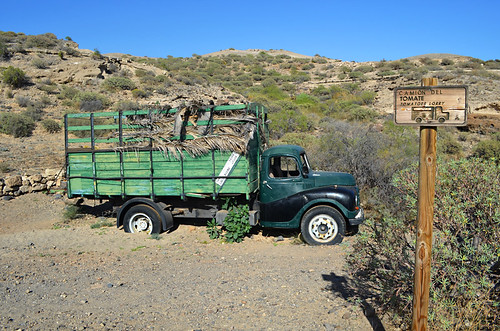 But there was one thing that we’ve wanted to see since we first saw an artist’s impression in a magazine years ago – the lake.

It might be man made, created to hold the water from the rainy season, but the pairing of emerald water and creamy pumice rocks is stunning; the transformation to the landscape as a result of the addition of water is a revelation.

This secret little lake in the south of Tenerife catapulted straight into the list of my favourite views on Tenerife. It’s no surprise it’s also a favourite spot with the local and passing bird life; a sanctuary for the likes of egrets, heron, coot, hoopoe and whistling ducks apparently. We only spotted some ducks. Whether they were whistling ones, who knows as they were quietly dozing in the afternoon sun. 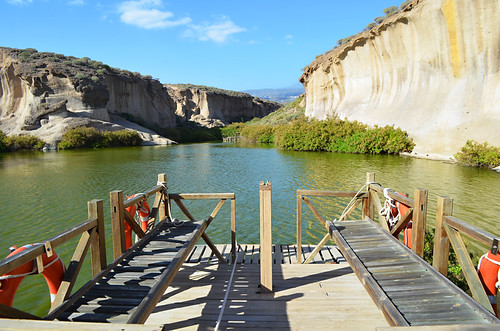 A small wooden ferry transports walkers across the lake. However, as we weren’t with a guide to operate it, for us it was the end of what had been an enlightening and delightful trail.

Note: Although entrance to the Barranco de San Blas is free for guests of the Sandos San Blas, there are guided walks available for guests (€7) and non-guests (€15), arranged via the hotel.