It was late July and the hillsides were green, flowers were in full bloom and the trees so laden with fruit that windfall had been left to rot on the ground.

By this time of the year much of Tenerife is looking dry and thirsty, the hillsides are more yellow brown than green.

People might think that’s because the town lies in the northern hills. But only people who don’t know Tegueste.

It’s an Eden of a place when it comes to flora.

We don’t walk much on Tenerife or the Canary Islands in summer. It’s just too hot. Saying that, this year, due to work circumstances, we’ve had to endure La Gomera’s humid hills and Fuerteventura’s hairdryer-hot winds. It was work which took us to Tegueste on a blistering Friday afternoon. 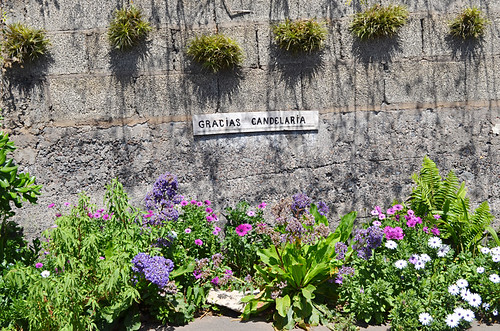 We like Tegueste a lot. It’s a pleasant northern town with a great market, some historic areas and fabulous fiestas.

The council had recently announced three themed walking routes in the town and surrounding countryside. They sounded interesting and we wanted to check them out to see if they were worth including in a new Tenerife walking holiday due to start in September.

Anyone who has used ‘official’ information to try to follow walking routes on Tenerife will have an idea what is coming next. There are lovely leaflets complimenting these walks and nice big information boards in the town. But as for signposts? They were conspicuous by their absence.

For half an hour we wandered the streets searching for the starting point whilst the locals decorated the town hall in preparation for a fiesta.

Eventually we gave up, deciding to start at one of the ‘things to see’ along the route and work backwards from there. 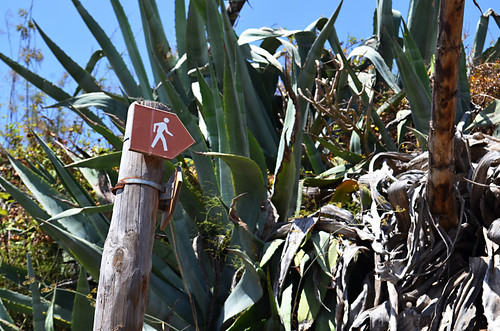 It worked, a small plaza and ermita provided enough clues for us to be able to hit the road, knowing that the routes were marked by poles with a tiny little man on them in different colours to signify which route you were on.

It seemed a simple but efficient way of marking the routes.

Anyone who has used ‘official’ information to try to follow walking routes will have an idea what is coming next – part two.

The trouble was the posts disappeared at key moments. As is so often the case there would be a signpost at points where whoever put them up could drive to, but not anywhere that involved any walking in order to erect them. We’re old hands at this and know that most of the time we have to rely on our map reading skills and knowledge of the landscape. 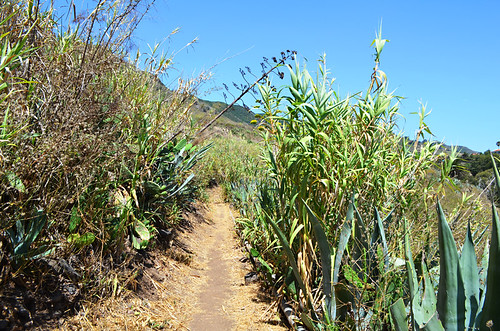 Shortly after we left the town to cross a barranco and follow the path through palm groves and cane thickets we realised these new routes were actually old routes. Every so often we passed information boards which had been around so long they were sun-bleached and useless.

The floral landscape around us changed constantly, cacti and agave giving way to plump pomegranates weighing down spindly branches and a plant with spiky fruit we didn’t recognise. The walls and façades of ancient cottages were awash with a rainbow of colour courtesy of the flowers which had been planted to prettify them.

The path took us through an old, detached part of the town we’d never seen before and then through neat vineyards before crossing the valley floor and climbing to the hilltops on the opposite side of the town to give superb views of Tegueste and the hot valley it sits in. 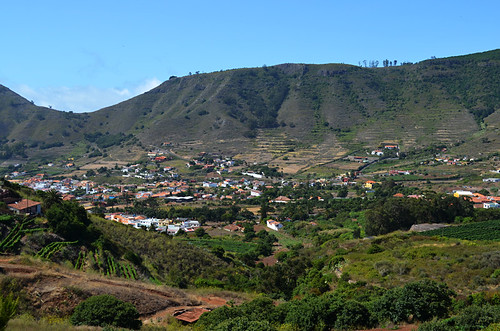 One of our favourite Tenerife wines, El Lomo, comes from this area and it was tempting to follow one of the signs declaring ‘Venta de Vinos’ but it was late in the afternoon and we wanted to complete the route.

The trail took us back into Tegueste to the rear of the market and then back out of the town, its meandering appearing on the illogical side.

But there was good reason for it.

The final section involved descending on a shady (very, very welcome by that point) and lovely cobbled path lined by laurels, palms, bougainvillea and an intriguing colonial mansion. 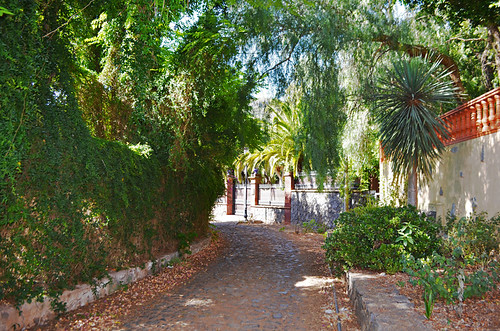 The route might not have been well signposted, but in a way that made it more fun and certainly added a challenge that made it all the more satisfying when we emerged from the dappled lane right back at the ermita we’d set off from.