We haven’t even reached the start of the route and I’m sweating… a lot.

“This might be too much today,” Andy comments as we eye the mountain peaks ahead. Somewhere up there is the halfway stage of our route. We’re in full on sunshine and even though it’s early, it’s already sizzling hot. 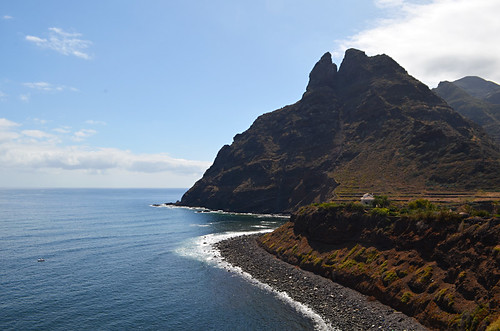 All along the coast beside us people are setting up mini camps; Laguneros from the city preparing for a day in the sun. Bronzed locals are lazing in rock pools, constructing barbecues and necking cervezas. It’s the smart thing to do on Tenerife on a hot Sunday in July.

But our visiting nephew has never been to the this part of Tenerife and a walk in the Anaga Mountains had been promised. We have hats, we have water and we know the terrain. There are plenty of shady caves en route. 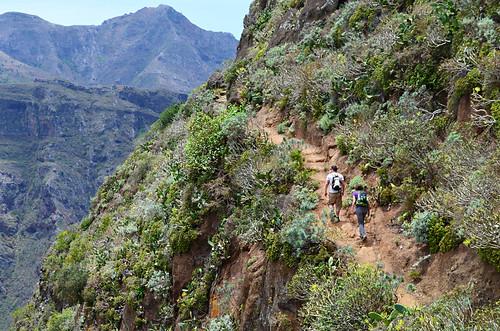 We also hope the clouds that are hovering over the jagged peaks will provide some cover as soon as we climb away from the coast. It’s a steep incline over a short distance and doing it in July sunshine borders on being masochistic.

As we ascend the ancient merchants’ trail, the terrain underfoot changes from hard rock to softish red earth and back. In parts, steps have been cut into the earth… a long time ago. Some are eroded and barely visible, others were clearly cut for giants and require quite a serious leg stretch. On paths like these I often wonder about the people who walked this way laden with goods centuries ago. Ahead of us we can see the scenery change as the more arid lower slopes make way for abandoned agricultural terraces and then thick, lush laurisilva forest.

There is cloud cover, but there are plenty of sunny spells as well. It’s ideal conditions for viewing the Anagas, if not for walking them. Too much cloud and the true beauty of this remote part of Tenerife can be obscured by misty bruma. 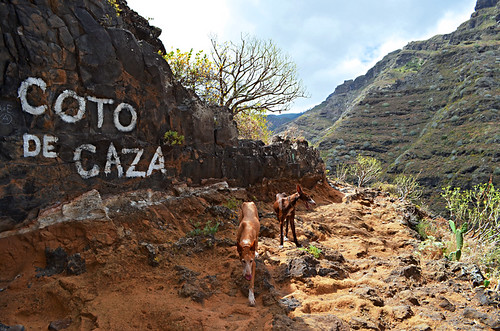 We climb slowly, maintaining a steady pace and stopping in any shallow caves for a drink and some relief. One has Coto de Caza (hunting area) painted on the wall. As we pose for photos, a group of podencos (hunting dogs) appear around the corner with perfect timing. They’re far too thin whilst the girth of the trainer who follows them suggests he hogs most of the food that goes into that household. 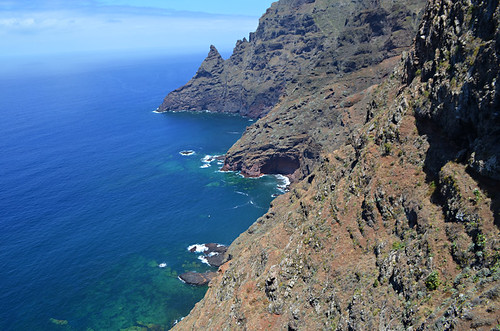 Our path twists its way into the mountains, briefly emerging at a natural mirador with a sheer drop to the Atlantic. The turquoise water way below us looks deliciously inviting but totally unattainable. An overhang provides a wonderfully cool, shaded seating area. All of us have the wet outlines of our rucksacks on our backs. Out nephew glugs at his water and we urge constraint. He ignores us. It is thirsty work and he knows there is a restaurant at our halfway goal. 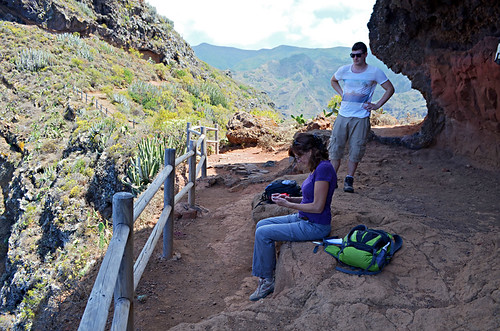 Onwards and upwards and the path steepens just before it levels out for the final leg. We see a family of Canarios ahead, an advance party of boys (about 10 years old) scan the hillside above us, looking for the unclear path. I point the route out to them. They voice their thanks and inquire how much longer to the end.

They’ve only just started and have a lot longer than twenty minutes to go. 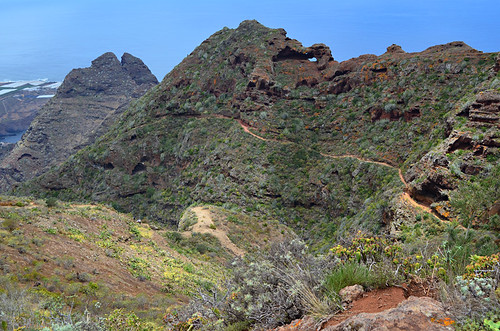 We puff our way up the slippy, final steep section and are rewarded with a vertiginous viewpoint. The wooden triangle of a barrier is a good place to catch the breath and enjoy the sort of views that if they weren’t on Tenerife would be continually getting posted onto facebook by ‘travellers’ accompanied by multitudinous declarations about their awesomeness.

This is not the Tenerife most people would recognise. This is Tenerife by way of South America.

The path levels out and we stroll past walls of prickly pear cactus then small allotments and the first of the cave houses at Chinamada. We finally emerge at a small ermita and plaza and make our way to La Cueva, a restaurant partly in a cave, to re-energize with ice cream and lots of sweet liquids. 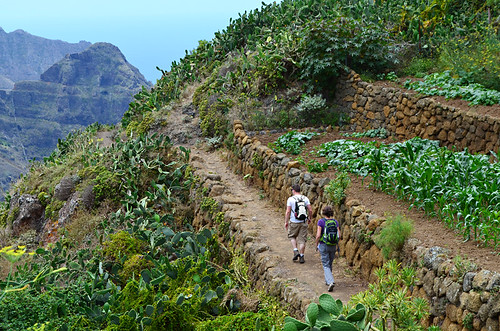 As we grab a table and sink our sweaty frames into chairs, the clouds evaporate completely.

The walking gods have been kind to us, waiting until the ascent part of the walk was over before allowing the sun to shine fully, revealing these marvellous mountains at their spectacular best.

Now all we’ve got to do is retrace our steps all the way back to Punta del Hidalgo in relentless summer sunshine.

At least it’s all downhill from here.

The merchant trail between San Miguel and Granadilla de Abona

Even though we knew about the camino real, built in the 16th century to connect Santa Cruz with southern towns as far as Adeje, we didn’t know where exactly to pick it up to head north east. […]