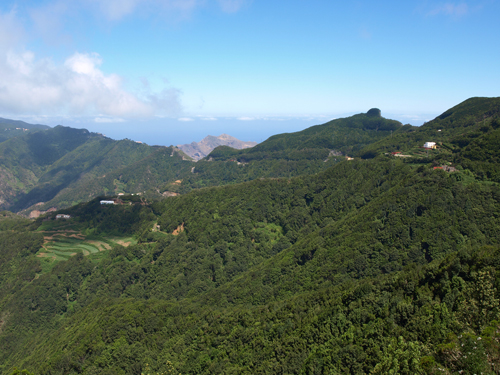 “You should have brought the small notebook,” said Jack in that annoying wisdom-with-the-benefit-of-hindsight way.
“ I deliberately brought this one, I prefer it,” I lied, trying to squeeze the A5 sized book into a pocket 3mm smaller than A5 size as spits of rain tried to run away with the ink from my words.

When, 20 or so minutes later, the exertion of walking worked up a sweat, the waterproof became too much and I stripped down to my fleece. Now there was nowhere to put the notebook.
“I told you you should have brought the smaller one,” said Jack.
“It’s not a problem,” I said smugly, tucking the book into the waistband of my trousers and under my fleece so that it was both safe and dry.

The path that skirted the barranco was churned up into a slimy quagmire which sucked our boots into its deep, squelchy grasp and held them tight. Mounds of droppings betrayed the party responsible for this mess; goats, and lots of them.
As I struggled to pull each foot from the mire without falling over, the heavens suddenly opened and in that moment there was a splat as the notebook slipped from my waistband and plopped, writing side down, into the mud and the rain.
I swear, if he says one word…

We hadn’t been on a decent Tenerife walk for months. Deadlines, visitors, the impending festive season and an annoyingly debilitating bout of flu had all taken their toll on our walking quotient. So we decided last week that it was high time for some soul replenishing contact with Tenerife’s abundant walking trails and there’s nowhere quite so spectacular as the Anaga Mountains for reminding the hiking boots what they were made for.

Wednesday dawned a bit overcast but with plenty of blue patches emerging and a quick check of the web-cams showed some promising cloud breaks over the Anagas so we made up the butties, packed the waterproofs and headed off.

It’s not unusual for Cruz Del Carmen to be in cloud. At this height (920 metres above sea level) the sea of clouds are a frequent visitor and the life force of the Monteverde or laurisilva forests of Mercedes which are some of the few remaining on the planet following the Ice Age. But you can’t help but smile at a ‘mirador’ (viewpoint) where it’s sometimes difficult to see your hand in front of your face. And with the cloud comes low temperatures; the moment I got out of the car I was wondering how the Ice Age hadn’t actually made it this far.

Unfazed, I put on my waterproof jacket for the extra warmth and we set off into the forest. It had poured with rain over the weekend and the red earth was churned up nicely and sticking so that our boots got heavier with every step. But it was fantastic to be out in the dense, ancient forest listening to the silence and breathing the musty, earthy air rich with the smell of fern spores and wet lichen.

We descended through the forest and emerged, as so often happens, beneath the clouds to a much brighter day. Looking across to the Barranco de Batán, the rain was evaporating into thin wisps of cloud which rose from the forest like the spirits of those recently departed, creating a landscape that could just as easily be the Amazon rain forest as northern Tenerife.

By the time we reached the troglodyte village of Chinamada where the thirty or so residents live in houses cut into the rocks, just as their ancestors did 500 years ago, the sun had broken through the clouds. It graced our picnic lunch with its presence and walked with us all the way to Las Carboneras before once again disappearing behind the clouds as we made the ascent back to Cruz Del Carmen and a well deserved Dorada at the bar/restaurant.
The next day our legs ached with the satisfaction of physical exertion and our heads were clearer than they’d been for weeks. Tenerife is such a fantastic island for hiking; it’s nothing short of a sin not to traverse its incredibly varied terrain on at least a monthly basis.

Now if I can just prize the pages of my notebook apart and decipher the mud script, I’ll be able to share the delights of this particular beautiful Tenerife walk with other hikers.

From pine forests to volcanic plains, the best Tenerife walking

Although gaining in popularity and reputation all the time as an excellent walking destination, Tenerife’s multi-personalities are still dominated by its fun in the sun reputation… […]