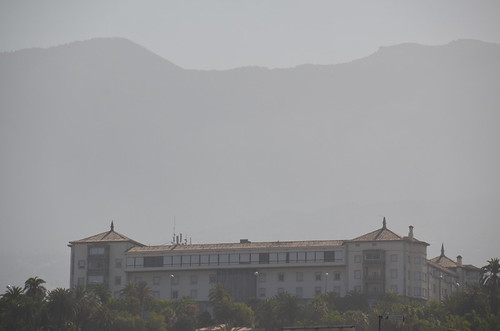 Tenerife Weather 14 to 20 November
As we didn’t return to Tenerife until Friday evening, we can’t say what the weather was like for most of the week. There was an alert for heavy rain which didn’t seem to materialise. There wasn’t much evidence of rain at our house as we had to fill the birdbath; usually a good measure of what’s been going on. A friend visiting neighbouring La Palma, where the alert was orange level for rain, certainly enjoyed decent weather across the island judging from his photos on facebook. Leaving a snowy North England it was lovely to return to evening temperatures of 24C at the airport which were still 23C when the bus dropped us off in Puerto de la Cruz at 8.30pm, although there was a noticeable yellow haze over the south of the island from the plane which suggested the tail end of a light calima. This was backed up by a hazy La Orotava Valley and a hot, sunny Saturday. Sunday was cooler and cloudier.

Weather Forecast for Tenerife 21 to 27 November
It appears to be one of those November weeks which could swing either way. The outlook is more or less the same for everywhere on Tenerife with a mix of cloud and sun and a chance of showers on most days, especially Tuesday afternoon and over the weekend. The only difference is a couple of degrees in temperatures between north and south and the actual likelihood of showers.

Weather in South Tenerife – There’s a chance of showers every day (5-80%) with Tuesday afternoon and the weekend looking most likely for rain. Saying that, although cloud is forecast for every day, there should be plenty of sunny spells as well. Shade temperatures start the week at a pleasant 23C and drop to 19/21C from Wednesday onwards.

Weather in North Tenerife – Although the forecast is for cloud and sun every day, only Wednesday should be a totally grey day. There will almost definitely be intermittent showers throughout the week with where the possibility veers between 5% and 100% each day with Tuesday afternoon and the weekend looking almost dead certs for rain at some point. Shade temperatures could stay around a quite low 18/19C all week.

Weather in East Tenerife – The outlook for Santa Cruz is similar to everywhere else with a mix of cloud and sun all week and a chance of showers each day from Tuesday (20-95%) with Tuesday and the weekend most likely for rain. Temperatures should stay around 19/20C all week.

Weather in South West Tenerife – The south west mostly mirrors the south except there’s a 75% chance of rain over the weekend rather than a 95% possibility. After a warm start to the week, temperatures should hang around 19/20C from Wednesday before starting to gradually climb again from Sunday.

Weather in the Mount Teide Crater – Even Teide National Park could suffer from the same pattern affecting the coast – cloud, sunny spells and showers at some point most days (except Thursday, Saturday and Sunday) at crater level. On the summit of Mount Teide the first half of the week could see sunshine with some cloud and a slight chance of snow showers. It should be full on sun from Thursday onwards although there might still be snow on Friday night. Temperatures should hover between 5 and 9C in the crater and a bone-chilling -6 and 0C on the peak of Mount Teide. There could be strong winds on Monday, Tuesday and Friday so check the cable car is operating before travelling.

The Tenerife Weather This Time in 2015
So what happened this time last year? “There was quite a bit of cloud most places with occasional light rain but a lot less than expected. There were also plenty of sunny spells.”