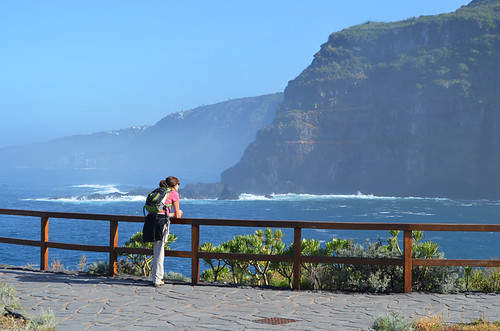 Weather Forecast for 28 December to 3 January
The last week of 2015 was a beautiful week on Tenerife. On some days if felt almost as hot as summer. New Year’s Eve was a perfect night for enjoying the celebrations in temperatures which were still 17C at 4am in Puerto de la Cruz. In other parts a cool wind meant it felt a bit on the chilly side out of the sun. Another feature of the week was the huge Atlantic waves which add spectacle to the coastline at this time of year. All in all a stunner of a week for walking or partying.

Weather Forecast for Tenerife 4 to 10 January
With the change of the month and year comes a change in the weather. Tenerife enters its version of winter for the next seven weeks or so. There should be more clouds than in recent weeks and Tuesday/Wednesday look like a certainty for some rain – unfortunately coinciding with the arrival of los Reyes Magos. Temperatures will also drop so that it might feel on the cool side in the shade. Saying that, sun is also forecast for most days and it will still be warm in the sunshine.

Weather in South Tenerife –  After a sunny Monday morning there will be a mix of cloud and sun all week with a 5-65% possibility of rain from Tuesday. Tuesday afternoon and evening look most likely for seeing some of the wet stuff. Temperatures start the week at 22/23C before dropping to 18/20C for the rest of the week.

Weather in North Tenerife –  All day Monday and Tuesday morning should be mainly sunny. From Tuesday afternoon to midday Wednesday there will be cloud and sun. Then it’s mainly sunny again until Thursday afternoon. After that it’s a mix of sun and cloud for the rest of the week. Like the south, there’s a chance of rain all week with the period from Tuesday midday to Wednesday midday looking like a dead cert for rain (50-90%). Temperatures start the week at 20/21C and drop to 17/18C. Thursday could be on the cool side with shade temperatures of around 16C.

Weather in East Tenerife –  All day Monday and Tuesday morning should be mainly sunny. From then it will be mainly a mix of cloud and sun for the rest of the week. As with other places, there’s a possibility of rain from Tuesday with Tuesday midday to Wednesday midday looking like rain is a certainty (50-90%). Temperatures mirror those in the north.

Weather in South West Tenerife –  Much the same as everywhere else with a sunny Monday and Tuesday morning giving way to cloud and sun for the rest of the week. Tuesday afternoon and Wednesday could be cloudiest and whilst there’s a good chance of showers, it’s less likely than in other parts (40-55%).Temperatures start the week at 21C before dropping to 18/19C for the rest of the week.

Weather in the Mount Teide Crater – The pattern is similar in Teide National Park where Monday morning, Wednesday, Thursday morning and Saturday morning look best for sunshine and blue skies. The rest of the time will see a mix of cloud, sun and showers. On the higher slopes of Mount Teide it should be cloud free all week except for Monday afternoon, when there might even be snow showers, and Thursday when there could be some cloud. There could also be snow on Saturday evening. Temperatures should hover between 8 and 9C in the crater and -1C and 3C on the summit of Mount Teide.

The Tenerife Weather This Time in 2014
So what happened this time last year? ‘…There was plenty of sunshine, but more cloud than in previous weeks. Shade temperatures were quite low, meaning that out of the sun, and in breezy areas, it felt positively cool. There was also some rainfall in parts, but nothing serious and it didn’t hang about. It also snowed a lot on Mount Teide, trapping around thirty cars in the park.’

Pic: New Year’s week was glorious along the north coast.