It’s tradition for us to fight the excesses of the festive period by getting in a couple of walks on Tenerife between Christmas and New Year. Boxing Day used to be a favourite for going on a walk but watching a Premier League football match has tended to win out over the last few years.

This year the tail end of a calima and a forecast for rain combined to convince us the day after Boxing Day was out as well. As it happened the rain didn’t amount to more than a short-lived drizzle. Still, Monday 28 December dawned with wonderful visibility and, after a few dozy clouds, blue skies. 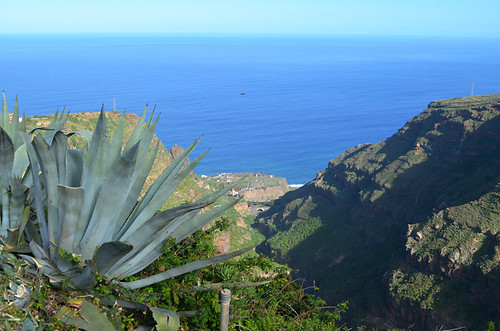 We hadn’t been to Barranco de Ruiz on Tenerife’s north west coast for a while so, as it’s relatively nearby, it won the privilege of hosting the first of our festive walks.

The funny thing about Barranco de Ruiz is the last time we were there it was packed with locals picnicking at the zona recreativa. This time there were more walkers than we’d ever seen previously. In fact every bus that stopped disgorged more of them. 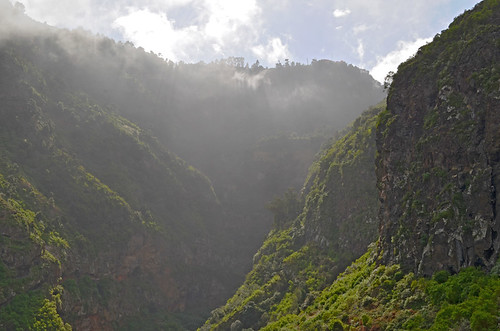 After waiting to make sure that a squall we could see out to sea was staying out to sea, we headed up the signposted path and into the barranco. It was the last signpost we would see in the ravine itself. As usual we stopped at the first junction, a few metres after leaving the zona recreativa, to take notes. As we did we were caught by two small groups of walkers, both clutching guidebooks.

As they headed along one path, we headed into the barranco. It wasn’t long before they clocked they’d gone the wrong way and were soon on our trail again. Even on what you’d think would be a straightforward route up a barranco, the lack of signposts can pose a problem when you don’t know the land. 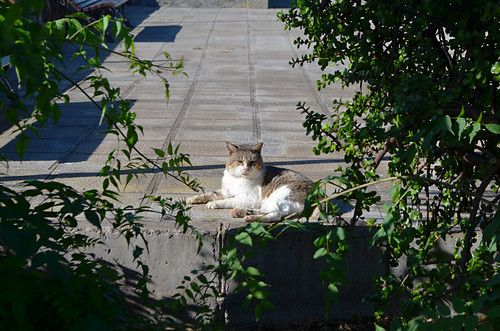 The path ascending the barranco is relatively steep, climbing 200m over quite a short distance. On an increasingly cloudless morning as the sun breached the ravine walls to beam down on us, it was hot, even though it was a December morn. The light fleeces we’d started with didn’t last long and within minutes of leaving the ravine floor we were down to tee-shirts.

As the views opened up to give glimpses along the north coast, plants like wild lavender added an aromatic accompaniment. The sun spreading its rays mistily across the glistening green depths of the ravine was a glorious sight. It’s visions like this which remind why walking on Tenerife is so addictive. There’s a feeling of remote wilderness to be found in places like Barranco de Ruiz even though in reality you’re surrounded by civilisation, small scale though it is. 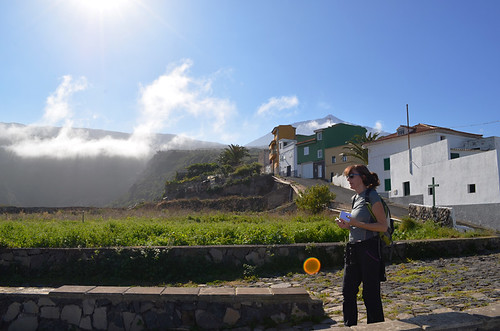 The path through Barranco de Ruiz presents a challenging enough ascent to make the benches at the small plaza which greets walkers at the ravine’s ridge very welcome. We shared the plaza with its panoramic views both ways along the north coast with a couple of other walkers and a plump cat dozing in the sunshine.

From this point the plan was to do a loop, to take a path that skirted below the rim of Barranco de Ruiz before returning via hamlets and country roads to where the path we’d originally been on emerges on the TF342. Our plans were scuppered though by a pretty serious official blockade closing the path we’d planned to take. Whilst pondering our options we followed the path which was still open upwards, passing old lavaderos (communal washing area) to the main road, where we sat and hatched an alternative plan. 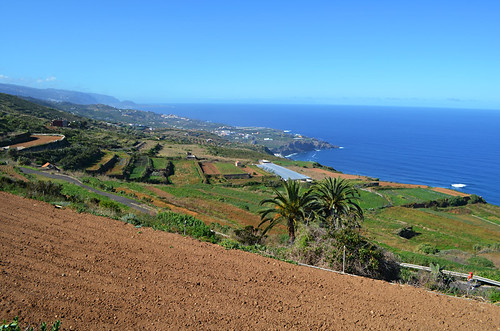 One of the beauties of walking on Tenerife is that there are trails, dirt paths and country roads everywhere. Instead of simply descending back through the Barranco de Ruiz to our starting point, it wasn’t too difficult to work out a route which would take us back to the coast via an alternative combination of paths, caminos reales and quiet roads.

Instead of revisiting the scenery around the barranco for our return trip, we descended to the coast at San Juan de la Rambla via neat agricultural plots of potatoes, pumpkins and vines whilst enjoying views down to Buenavista del Norte and inland to Mount Teide.

Where we shared the trail through the Barranco de Ruiz with other walkers, on the cobbled together return stage we met nobody until we reached the coast.

The closed path meant we’d had to get creative and as a result ended up with a completely circular route which was longer and actually better than the one we’d originally planned.