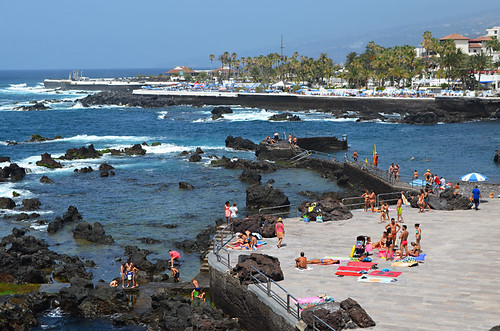 Weather Forecast for 11 to 17 May
We arrived back on Tenerife on Tuesday, following a calima cloud that seemed to stretch all the way to Cape Verde. Whilst temperatures in the south were searing beneath the haze, things felt quite a bit fresher in the north. As the week progressed, it became very hot everywhere even when the calima shifted leaving a very hot weekend that felt more like summer than May.

Weather Forecast for Tenerife 18 to 24 May
The south and south west should be mostly sunny with only an outside chance of showers. In the north and east there will be sun every day (except Wednesday in the capital) but there will be cloudy spells during the second half of the week. There’s also a good chance we’ll see some May showers at some point. Not uncommon for this time of year and a last chance to dampen things down before summer starts. The week will start hot everywhere before cooling down to a more spring-like 20C in the shade.

Weather in South Tenerife – It looks like it’s going to be a sunny week. The searing heat will calm down with with shade temperatures starting the week at 23/24C before settling around 20C from Wednesday. There might be a bit of cloud on Sunday when there’s a 20% chance of showers.

Weather in North Tenerife –  It could be a bit different in the north where a sunny start to the week becomes a mix of cloud and sunny spells from Wednesday. There will also be a 10-45% chance of rain during the second half of the week. Temperatures reflect those of the south, starting at 23/24C before dropping to 19/20c for the bulk of the week.

Weather in East Tenerife –  The same pattern as the north of Tenerife except Wednesday looks like it could be completely overcast.

Weather in South West Tenerife – Exactly the same as the forecast for the south, maybe a degree or so warmer.

Weather in the Mount Teide Crater –  There will be some cloudy spells in the crater on Monday as well as Tuesday and Saturday afternoon. Apart from that it’s sunshine. On Mount Teide’s upper slopes there will also be cloudy spells on Monday, but from then on it should be clear. However, it could be quite windy on Wednesday which might affect the cable car. Temperatures should hover between 9 and14C in the crater and 1and 7C on the summit of Mount Teide. It could be quite windy higher up Teide this afternoon and also on Thursday, so worth checking if

The Tenerife Weather This Time in 2014
So what happened this time last year? “A mix of sun and cloud with occasional showers; typical end of May weather.” Say no more.

Pic: With summer-like temperatures it was good to see the San Telmo sundeck looking more like its old self again.