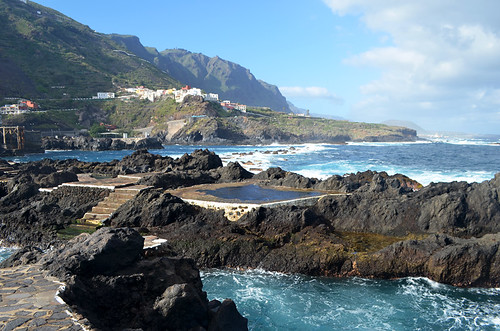 Weather Forecast for 25 to 31 January
It was another week which didn’t pan out as predicted across Tenerife – thankfully, as we were guiding a filmmaker around the island during the part of the week which was supposed to be dull and with showers. In the end there was plenty of sunshine and the island’s micro-climates meant we experienced quite dramatic variations in weather which was good for a bit of high impact. But the sun shone at all the locations we visited in the north, east, west and in central Tenerife. It also remained warm most of the time, with locals in various places commenting ‘winter isn’t coming this year.’ A yellow weather alert was raised for wind and choppy seas during the second half of the week, but there was hardly any evidence of wind when travelled from coast to Teide National Park on Saturday. Sunday was a beautiful day along the north coast until we reached the west where it was a breezy and quite cool affair for the San Abad celebrations in Buenavista del Norte – it didn’t affect the fun though. Overall much better than expected.

Weather Forecast for Tenerife 1 to 7 February
The forecast for the coming week isn’t greatly different from recent weeks with plenty of sunshine, some cloudy spells and a slight chance of rain. The north and east should have slightly more sunshine than the south and south west, but it’s minimal. Temperatures also follow a similar pattern with a warm start to the week before the temperature drops slightly for the second half of the week. A farmer in Anaga told us last week that the predicted rain for Friday wouldn’t happen and it would remain dry till Tuesday when it would rain. He got the dry weekend bit right, let’s see how he does with his prediction for tomorrow. Carnival starts properly at the end of this week and that usually means there will be rain at some point.

Weather in South Tenerife –  Mostly it will be sunny with some cloudy spells. Tuesday could be a cloudy day and Thursday morning could also be a bit grey although there’s only a slight chance of showers (5-10%). Temperatures start the week around 24C before dropping a few of degrees to 19/21C from Wednesday.

Weather in North Tenerife –  Like the south it should mostly be a sunny week with only occasional cloud. The only serious cloud should be on Tuesday afternoon. Temperatures start the week at 21C before dropping to 17/18C in the shade from Wednesday. There’s a slight chance of showers on a couple of days/nights (5-20%).

Weather in East Tenerife –  The forecast for Santa Cruz and the east is almost exactly the same as the north.

Weather in the Mount Teide Crater – It could be a week of sun, cloudy spells and occasional light rain in Teide National Park, although the sun will shine every day. It’s similar on Mount Teide except there could be snow showers between Wednesday and Friday. The it’s looking like full sun for the weekend. Temperatures should hover between 7 and 11C in the crater and -2C and 0C on the summit of Mount Teide.

The Tenerife Weather This Time in 2015
So what happened this time last year? ‘Whilst it has actually been pretty good weather for walking, it’s not been good for sunbathing. That isn’t going to get any better this week. Again the north looks as though it will see more sunny spells than other parts…’

Pic: Choppy seas and sun and cloud over Isla Baja.