It’s a long way to the Anaga Mountains.

Last week we collected our walking companion at 9:30am and set off to Afur to re-walk our Hamlets & Hillsides route. Although it’s only around 50km as the crow flies and we were beyond commute hours, it still took us the best part of an hour and a half to get there. Some of the blame for the delay rests on the shoulders of nervous fellow drivers who seem uncomfortable with the whole concept of a winding forest road, and some goes to cyclists who ride two abreast on said winding roads, either oblivious or contemptuous of the build-up of traffic behind them. But it’s still not a quick journey albeit a picturesque one. 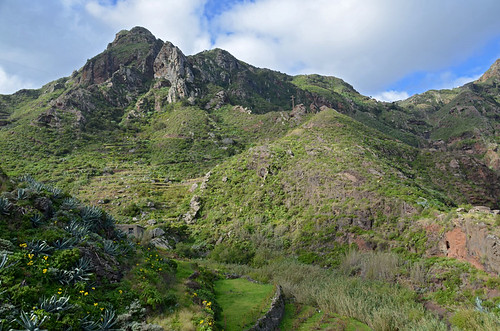 We left Puerto de la Cruz in warm sunshine beneath blue skies and hoped for the best as we headed to the mountains. As we neared Cruz del Carmen, low cloud began to appear and we feared we may not see Anaga at its best but we were committed to doing the walk and there was nothing to do but continue. As it turned out, we quickly drove out of the clouds and the rest of our journey to Afur was in full sun.

The last time we walked this route it was the end of a long, hot summer and although the Afur barranco still had some pools and small waterfalls in it, the landscape was arid and there were few wild flowers in bloom. This time it was an altogether different story. 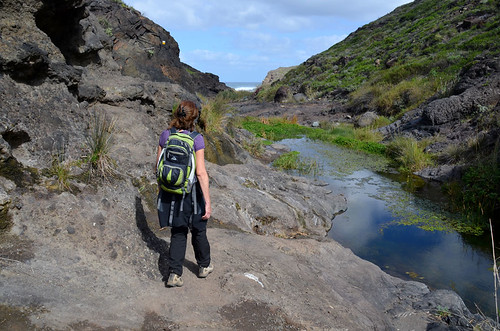 Rich, green hillsides decorated with neat terraces of red earth and speckled with the bright yellow faces of flowers and silver swords of agave leaves surrounded us as we descended into the Afur barranco. Heading deeper into the ravine, the trickle of running water we encountered in August had become a babbling brook which chuckled and gurgled alongside us like some child enraptured in a game. As the stream neared the beach of Tamadite, the summer’s shallow pond had blossomed into a deep pool of crystal water beneath whose surface, graceful tendrils of aquatic grasses swayed, waiting for some Ophelia to lie amongst them. 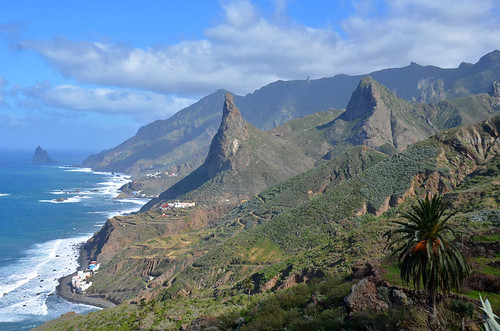 Briefly, we sat on boulders on the black sand beach of Tamadite, stood and stared at the beauty of the coastline that stretcheed beyond its shores, breathed in the ozone and felt the gentle spray on our faces before climbing the barranco to emerge onto the cliff top. Now high above the north east tip of the island, we exchanged grasses and pools for sloped bedecked in candelabra cardón, Atlantic waves crashing to the shore below and a row of stone profiles rising from the sea and shimmering in the distant heat haze. Never had I seen this path more splendid. 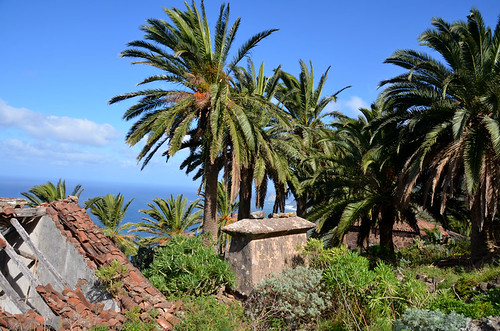 Arriving above the pretty hamlet of Taganana, a final hard ascent took us up to the ridge before we gently ascended back into Afur and the welcome sight of the local bar which was open for business. In all the time we were walking, some 5 hours or so, we encountered very few other walkers and the further we went, the fewer we passed.

Last week served to reinforce two truths in my mind. Firstly, the Anaga Mountains provide the very best walking this island has to offer and that’s a statement of considerable merit given the number and diversity of excellent walking routes there are. Jack and I have walked extensively in Europe and have enjoyed stunning scenery in many of its best known and most revered mountain ranges and the Anagas hold up well alongside them all. 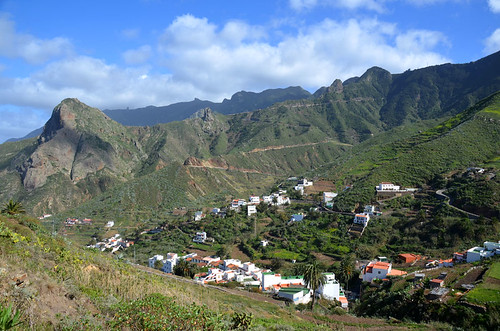 The second thing I was reminded of was that there’s no such thing as easy walking in these mountains. If you want to enjoy the epic beauty that’s on offer, you have to shed some sweat to find it. Admittedly, I shed more sweat than I had anticipated, afternoon temperatures doing a passable impression of late spring/early summer rather February, but there are always going to be ascents and descents when you pull on the hiking boots and head to this amazing corner of Tenerife.

It’s a long way to the Anaga Mountains. Hopefully that means they will always be remote and unspoiled.

Climbing The Walls to Montaña Guajara

Stepping out of the Teide Parador at 8.30am, our feet crunch on the frosty surface where the sun has not yet crept to warm the earth. Behind us, Mount Teide blazons in the afterglow of her crimson sunrise… […]