We were heading straight to what looked like someone’s garage.

It certainly looked like one and many people might have turned back at this point, convinced they’d taken a wrong turning. For a moment I hesitated. It did look as though there was nowhere else to go. But we were following our own directions, checking to make sure they were still accurate.

“This is definitely the way,” Andy reassured me. “I remember it well.”

As we reached the garage, we turned right and ducked down a narrow passage which looked as though it led to someone’s house. For 100m or so we wound past houses with small yards where hens clucked and bemused little dogs watched us, for once stricken into silence at the unusual sight of strangers on their patch. 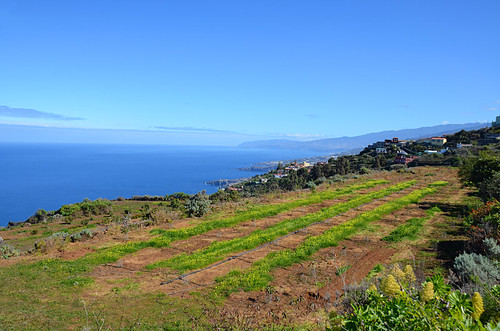 The concrete path emerged at a tarmac road which we crossed to join the familiar cobbles of a camino real. Once a busy merchant trail it was now long forgotten. There were no signposts or splashes of paint to even show it was a path. After a few steps the old track emerged from the hamlet and views of Isla Baja opened up before us, gloriously green against a deep blue sea on a warm January day.

“This is the best walk you’ve taken me on,” announced our friend as he soaked up the scenery. “How did you find this?” 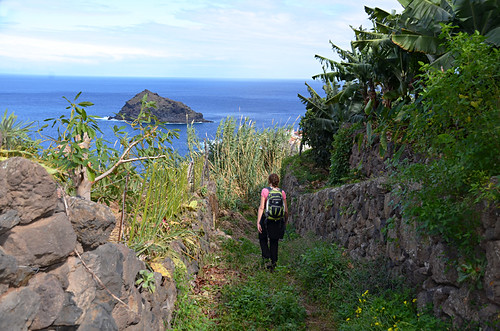 It was satisfying to hear his comment about the walk, and slightly worrying as he’d made similar comments about our previous two walks, each being better than the one before. At some point we weren’t going to be able to better the last… but maybe not for a while.

The answer to his question was a knowledge of how things work on the island, gained over the last decade or so, lots of planning beforehand and a great deal of trial and error when it came to actually piecing it together on the ground.

The latter can often involve Andy standing in the middle of a patch of broom or me negotiating a minefield of prickly pear whilst the other shouts “can you see the path yet?” 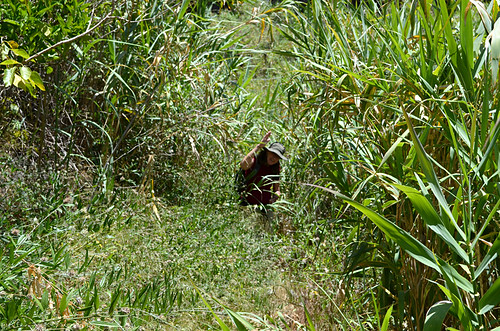 Sometimes it works and we emerge with a cracker of a route, as in the case mentioned above, and sometimes it doesn’t.

This week we received a query from someone who was hoping to complete an ambitious and long trail on the island. They sent us a link to their proposed route. With a glance we could see the route was a seriously bad one, mostly on busy roads. That glance also told us they’d planned it using Google Maps. 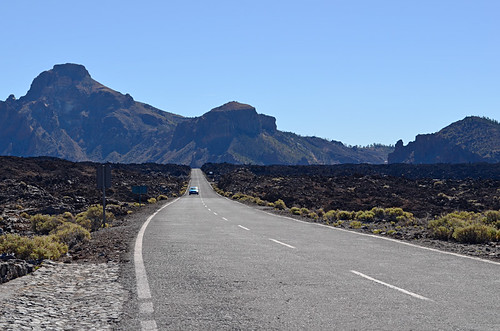 There are many online tools which are a boon to planning walking routes in advance. Google Maps isn’t one of them. Don’t get me wrong, I love Google Maps and use it for all sorts of things, but when you ask for walking directions, it’ll generally send your little man scuttling along the nearest road rather than on walking paths.

I’ve also recently been following blogs from a visiting walker who followed the GR131. It’s not our favourite way to walk across the Canary Islands, but it is a ready made trail for people who have a limited time to explore the islands. At one point he names and shames Freytag & Berndt, one of the ‘decent’ maps there are for Tenerife, because the GR131 shown on the map doesn’t match the GR131 route on the ground. He also met other hikers using the map we use, Kompass, and it was no better. 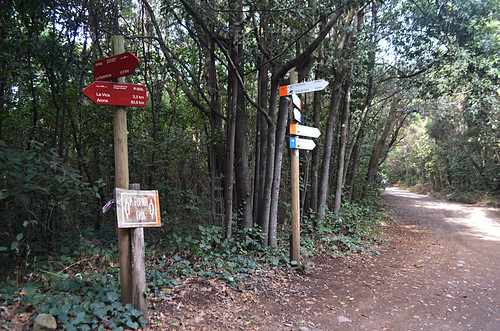 Maps for the Canary Islands aren’t of Ordnance Survey standard. Some, like those mentioned, are good guides but not always 100% accurate. Those responsible in the islands for maintaining walking routes don’t help. When they put up new signposts they can erect them in different positions and also, unhelpfully, change names. In the case of the GR131 the authorities have changed the route on Tenerife so that it doesn’t match the old GR131 which is still on maps. Our current Kompass map is for 2014-2019 and it shows the old route rather than the new. 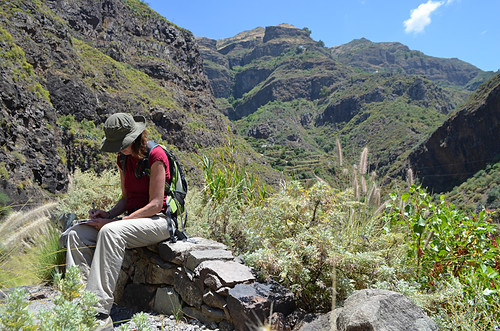 We use a number of tools to help plan a route and these have made life an awful lot easier. But with all the new technology currently available there are still no shortcuts to creating walking routes on Tenerife, or anywhere else. There is still only one way to make sure a route is accurate and that’s to do the leg work and walk it.

The route mentioned at the start is included in our West World series of routes as well as in our Walk this Way Tenerife guidebook.