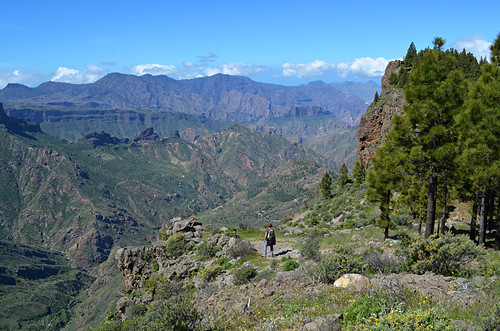 Tenerife Weather 18 to 24 April
By all accounts it was much the same as the previous week with plenty of sunshine and a few cloudy spells across Tenerife with some light rainfall in places. We spent the week walking in the hills of Gran Canaria where it was unusually hot, even at 1500m. At times we would have been glad of cloud cover, but there wasn’t much of it about.

Weather Forecast for Tenerife 25 April to 1 May
The forecast for the final week of April remains more or less the same as in previous weeks with a lot of sunshine forecast with some cloudy spells and light showers over the weekend. If things pan out the same as recent weeks that should mean mostly warm, sunny weather.

Weather in South Tenerife –  The week could start with a sunny morning and then more cloud than sun. From Tuesday onward it will mostly be sunny with some cloud. There’s a 5 to 30% chance of showers from Thursday and over the weekend but that’s likely to be in the hills and/or overnight. Shade temperatures start the week at 23/24C and then will stick around 19/20C from Wednesday onwards.

Weather in North Tenerife –  It could be a week of two halves in the north with mainly sunshine from Monday to Wednesday and then a mix of cloud and sun from Thursday onwards. There’s a 15 to 40% chance of showers from Thursday afternoon through the Sunday. Shade temperatures start the week around 23C before dropping slightly to 19C for the rest of the week.

Weather in East Tenerife –  In Santa Cruz it should be mostly sunny until Friday when the cloud will roll in. The weekend could be grey not a lot of sunshine. Temperatures mirror those of the north.

Weather in South West Tenerife – Very similar to the south with a sunny Monday morning giving way to an afternoon of cloud and sun.  Tuesday and Wednesday should be sunny. Thursday to Sunday should see a mix of cloud and sun with a 5 to 20% possibility of showers. Temperatures should start the week at 23C before settling at 20/21C from Wednesday through to Sunday.

Weather in the Mount Teide Crater – Except for Wednesday which should be sunny, there could be a pattern of sunny mornings and a mix of sun and cloud in the afternoon in Teide National Park at crater level. The weekend could see mostly cloud and sun with the possibility of light showers. It should be mostly clear and sunny on the summit of Mount Teide although there might be some cloud on Monday and Thursday afternoons as well as over the weekend when there’s the outside possibility of light snow. Temperatures should hover between 9 and 13C in the crater and 1 and 3C on the peak of Mount Teide.

The Tenerife Weather This Time in 2015
So what happened this time last year? ‘The week panned out more or less as predicted with sunshine dominating after another start to the week which saw cloudy spells. After that it was mainly hot and sunny for most of the week in coastal areas across Tenerife. ‘

Weather Forecast for Tenerife from 15th to 21st August

The week begins with a yellow alert weather warning for because of a heatwave affecting everywhere but the north coast. Temperatures in the east, south, south west and high areas could reach reach 34C in the shade… […]