When you look at the main resorts of Costa Adeje sprawling west along the coast towards Playa Paraiso it seems quite incredible that inbetween could be wild, sandy coves and one of the most picturesque spots you’ll find anywhere along Tenerife’s southern coastline.

Staying at the Hotel Bahia Principe in Playa Paraiso gave us the opportunity to wander a coastal path which initially doesn’t look particularly inspiring. The scrubby desert landscape might not look the most attractive part of Tenerife’s coastline but first impressions can be deceptive. 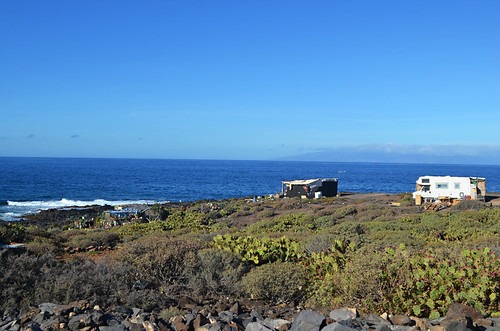 A lonely, burnt out Berlingo added to the general untidiness of the initial part of the route. A mini shanty hamlet in the middle of tabaiba and prickly pear completed the vibe that we were walking through a surreal desert version of a depressed inner city area from the 1980s. But there was something intriguing about it all, in a Breaking Bad sort of way. It was different. There was even an element of modern day band of Robinson Crusoes about the scene – drop out, chill out. 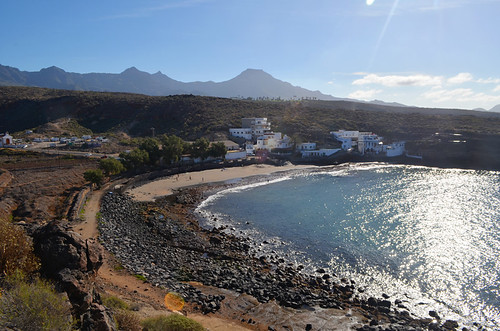 Within moments the vistas changed to reveal a Tenerife rarity, an unspoiled picturesque fishing hamlet with a sandy beach set in a protective bay. Untouched by developers, El Puertito is a tonic for the eyes. In summer it can be full of wild campers (whether wild in nature I couldn’t say). But on a hot, February, Saturday morning, the small beach was dozy and tranquil with only a handful of early morning sunbathers. Its sheltered bay was beautifully calm, devoid of the divers who would arrive before too long to swim with the green turtles who are also fans of El Puertito.

Descending a skithery, sandy path to the El Puertito unlocked memories of arriving by foot at remote beaches on various Greek Islands. As we strolled through the hamlet, passing upturned fishing boats to climb out of the cove via a narrow alley between the whitewashed houses, the feeling that this could have been somewhere in Greece intensified. 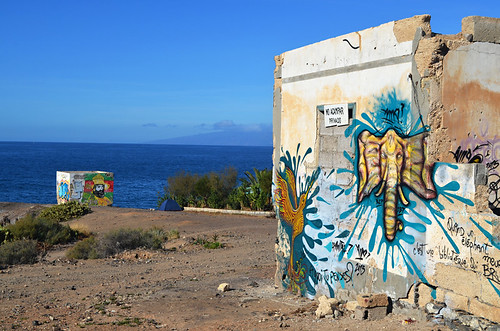 Emerging on the cliffs on the opposite side of El Puertito we were met with a a sight that came across as a bizarre mix of rural terrain with urban attitude – low, abandoned buildings covered in graffiti. Aesthetically artistic graffiti it has to be said, but nonetheless a bit of grungy contrast against the blue Atlantic and La Gomera on the horizon. I quite liked it.

It’s worth edging close to the clifftops at this part. The rock formations jutting into the sea are quite a feature along this stretch of coastline, some are an artist’s palette of colours whereas other look like petrified dinosaurs slumped into the sea. At one part a blow hole spurted spray loudly into the air, for a moment prompting a double take to see if a whale had ventured too close to the shore. 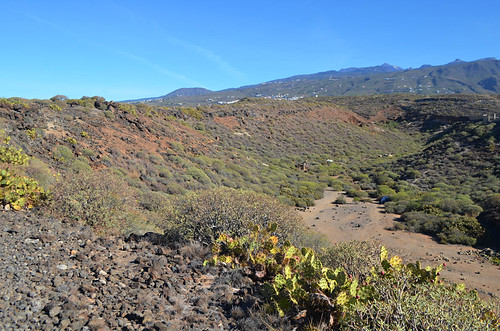 Ravines hidden from anywhere but the ridges above them shield small sandy valleys. In one a few tents were barely visible amongst the dense clumps of bushes, their bright colours the only thing that distinguished them from the green domes of the plants around them. A khaki tent would have been invisible.

In the distance was Playa Diego Hernandez, a neo-hippy nudist beach cut off from the modern resort which is creeping down the hill toward it. Its wild beauty is a complete contrast to the neat greens of the golf course that can be just be seen on the hill above the beach.

You get the feeling its free and easy days might be numbered. 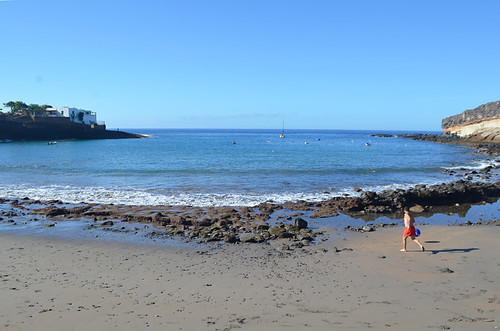 For now this section of the coast exists as a reminder of what this part of the south must have all once looked like.

The expansion of Costa Adeje has been good for tourism and the island’s economy.

But it would be nice if they called a halt to the building of hotels and apartment blocks and preserved what’s left of this little fascinating part of the southern coastline with its pretty coves, sandy beaches and lovely, sleepy little El Puertito.