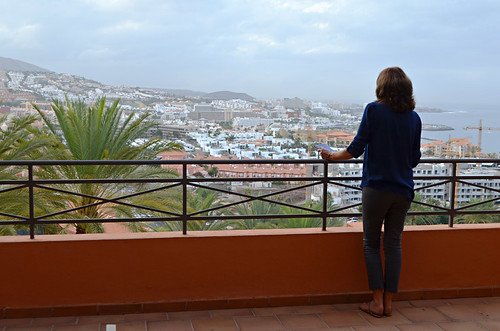 Tenerife Weather 4 to 10 October
A bit of a mixed week all round. Although there was plenty of sunshine, there was also a lot of cloud. We spent two days in the Costa Adeje area and although it was warm, the sun struggled to make a great impact whilst we were there. It was brighter when we returned north but the pattern of sun and cloudy spells was more or less the same. It looked like one of those north/south east/west weeks when the east/west of the island enjoyed more sun than the north/south.

Weather Forecast for Tenerife 10 to 16 October
The outlook is for weather that looks more in line with what we normally get on Tenerife towards the end of October when the season really changes. So, although the sun will shine most places every day, there could be a lot of cloud throughout the week, a chance of rain in the south and south west on Tuesday morning and more rain pretty much everywhere over the weekend.

Weather in South Tenerife – Even though the sun should shine every day, the forecast is for a rather cloudy week with a chance of rain throughout the week. Early Tuesday morning and the weekend look most likely for rain (75/80% possibility) with there only being a 5 to 45% chance of showers during the rest of the week. It should remain lovely and warm with shade temperatures staying around 23/25C.

Weather in North Tenerife – In the north there should be plenty of sunshine between Monday and Wednesday, with some cloud as the week progresses. From Thursday onward there could be more cloud than sun and rain looks almost certain (65-95%). Temperatures should be around 23/24C until Friday when they drop a couple of degrees to 21/22C for the weekend.

Weather in East Tenerife – The pattern for the east mirrors that of the north except there’s more chance of rain on Thursday morning (80%) and less over the weekend (55-65%). Temperatures should stick around 22/23C all week.

Weather in South West Tenerife – The south west partly matches the south except there should be more sun throughout the week. There’s an 80% chance of rain on Tuesday morning and the weekend looks likely for some wet stuff falling, 45% on Friday rising to 75% on Saturday and Sunday. There’s a possibility of showers on other days, but it’s a low one (5-45%). Temperatures should be around 23/24C until Friday when they drop a couple of degrees to 20/22C for the weekend.

Weather in the Mount Teide Crater – It could be a mixed week in Teide National Park with a sunny start to the week before some clouds drift in from Tuesday afternoon bringing a chance of rain Thursday onward and possibly even a thunderstorm over the weekend. On the summit of Mount Teide it should be mainly sunshine until Friday afternoon when there will be some cloud and even a slim chance of snow showers as the weather conditions affecting the lower slopes spread higher up the mountain for the weekend. Temperatures should hover between 11 and 13C in the crater and 2 and 5C on the peak of Mount Teide.

Pic: A bit of a grey morning looking over Costa Adeje last week.