Walking down the narrow street in the little village of Vento we could see two young women ahead of us, locking their car which was parked as close to the start of the path as it was possible to get without actually blocking it, and adjusting hats, boots and rucksacks before setting off at a brisk pace. As they went, they chatted, loudly, and incessantly. From one rucksack the tinny sound of Spanish pop music intermittently joined the chatter. 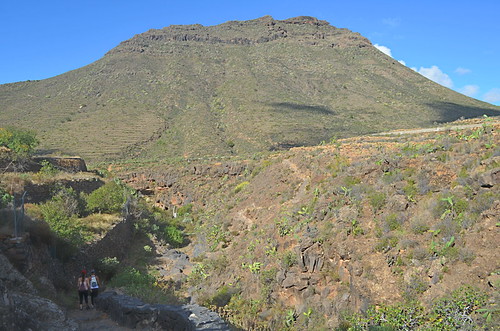 The sounds of goat bells, a distant yapping dog and the twitter of birdsong which had hitherto been our soundtrack, was gone. I sighed heavily, wishing we had managed to get in front of these girls before they set off. 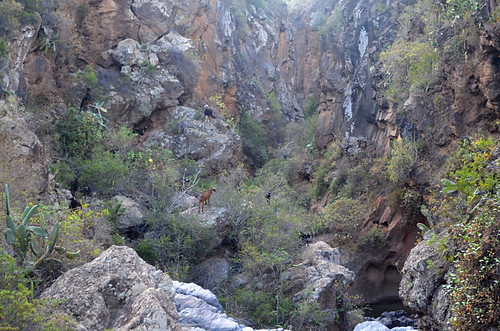 Throughout the entire seven and a half kilometres and three hours of ascent and descent, the girls were either directly in front of us or directly behind us and not once, despite the wheeze and grunt effort of the climb, did they stop talking. But the funny thing is, as we continued, snippets of conversation passing between us at each pass and counter pass along the route, we sort of got used to them being there. And when they did a spontaneous little song and dance on the summit, we laughed along with them, a nod to the shared camaraderie of achievement.

It was also selfishly gratifying to find that, despite them probably being around thirty years our juniors, we matched each other’s progress the whole way, finally finishing ahead of them. 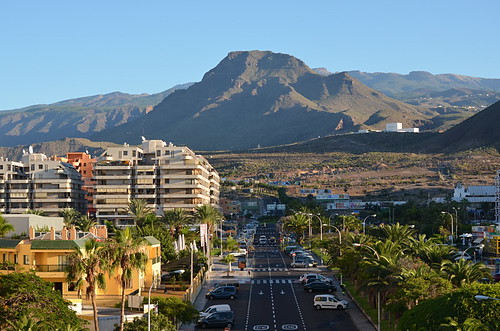 Roque del Condé
It’s not the highest peak in the arid, volcanic terrain of the south of Tenerife but the distinctive, table top outline of Roque del Condé dominates its landscape. Lying alongside the impressive Barranco del Rey which marks the boundary between Arona and Adeje, the top of the mountain sits 1000 metres above sea level and was once terraced and farmed, its height ensuring regular moisture from the clouds that regularly bank up over it. 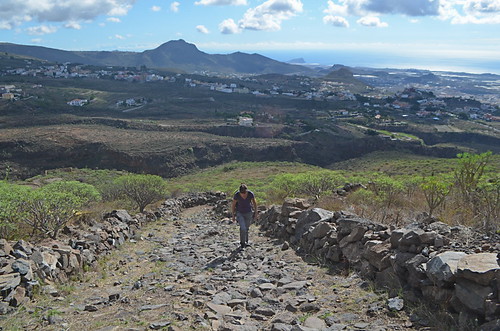 Dropping into the Barranco del Rey before beginning its 200 metre ascent over 2 kilometres to reach the summit, the path winds up the east flank of the mountain, skirting the abandoned terraces and threshing circles that are all that remain of the cereal crops of El Tablero that once thrived here. 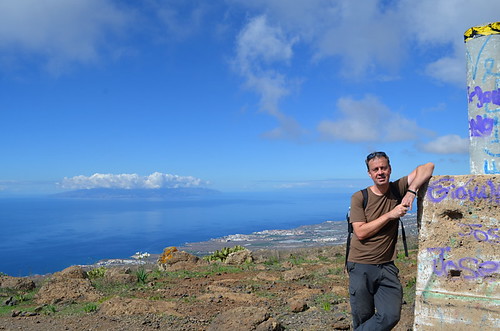 Emerging onto the west flank, superb views open up over the south and south west coast, from Montaña Guaza to Playa Del Duque. Once on the summit, a clear day rewards with the sight of no less than four islands shimmering in the Atlantic Ocean; La Gomera, El Hierro and La Palma to the west and Gran Canaria to the east. It’s a fitting reward for the not-insubstantial effort of getting there.

The Roque del Condé path is 7.4km (4.5 miles), takes 3 hours and has now been added to our Old South, self-guided walking directions. The route is graded a 3 in our grading of difficulty which means it’s a good thigh muscle workout but within the range of reasonably fit walkers. Although only a relatively short route, the ascent to the summit is steep and is over rough terrain. San Miguel. A wonderful opportunity to take a trip back in time and discover the character of the south of Tenerife before tourism dominated its coastline. In the hills above Playa de las Américas and Costa Adeje is a landscape dotted with hamlets and agricultural terraces which feels far removed from the modern resorts which are occasionally stunningly visible from ancient summits and old merchants’ trails.
Difficulty level 3: All walks are all well within the range of reasonably fit walkers although Roque del Conde has some testing ascents and descents and some rough terrain.
Where: South Tenerife; Distance: 5 routes ranging from 3 to 8 kilometres in length; Time: walks are all 3 hours or under in length

Buy all seven Island Walks guides (including The Old South) for just €9.