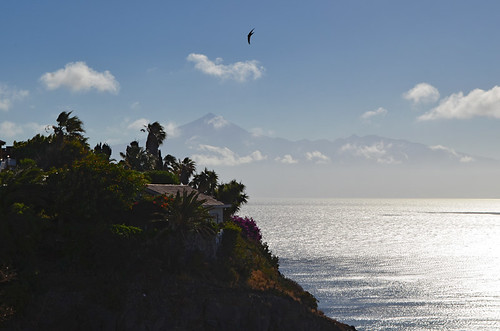 Weather Forecast for 27 July to 2 August
By all accounts it was a hot week with a lot of sunshine and some sunny spells. We were in La Gomera for most of the week where it was hot and mostly sunny but with one cloudy day when there was even some drizzle. It wasn’t as hot as in previous weeks which was a relief as we had some serious walking to do.

Weather Forecast for Tenerife 3 to 9 August
It looks like it should be a hot week with plenty of sunshine but also cloudy spells most days and a chance of showers from Tuesday all across Tenerife. Any drizzle (because that’s the ‘rain’ we experienced on La Gomera last week) will be extremely welcome in the week before pilgrims take to the mountain and forest trails to make their way to Candelaria. Hottest spot on the island this week looks like the south west by a couple of degrees.

Weather in South Tenerife –  Although it should be mainly sunny, there will be some light cloud about most days with a 5 to 30% possibility of light rain from Tuesday onwards. Temperatures start the week at 27C, dropping to a perfect 25C midweek before climbing to near 30C for the weekend.

Weather in North Tenerife –  Similar to the south, after a sunny Monday it will be sunshine with some light cloudy spells and a 5 to 55% chance of light showers. Temperatures will stay around a perfect 24/25C in the shade all week before rising to 27C on Sunday.

Weather in East Tenerife – Although the sun will shine every day, Wednesday to Saturday could see some significant cloud. Like everywhere else there’s a chance of rain from Tuesday (5 to 55%). Temperatures match those of the north.

Weather in South West Tenerife – Mainly the same as the south west with mostly sunshine and a few light cloudy spells and a chance of rain from Tuesday (5-30%). It looks like the south west will be the hottest spot on Tenerife with temperatures starting the week and rising as the week progresses to reach 31C in the shade on Sunday.

Weather in the Mount Teide Crater – It looks like it could be one of those rare weeks where cloud shrouds Mount Teide for much of the week. Although the sun will shine every day there will also be cloud and a chance of rain from Tuesday with Wednesday and Thursday looking gloomiest at both crater and summit levels. Temperatures should hover between 13 and 17C in the crater and 7 and 10C on the summit of Mount Teide.

The Tenerife Weather This Time in 2014
So what happened this time last year? Not very different from the prediction for this year – “It was certainly hot enough all week but with quite a bit of cloud as well, especially at the start of the week…”

Weather Forecast for Tenerife from 26th May to 1st June 2014

Looks it will be an island of two halves. Sunshine and blue skies in the south and sunshine, cloud and some rain in the north. If it’s like last week, most of… […]