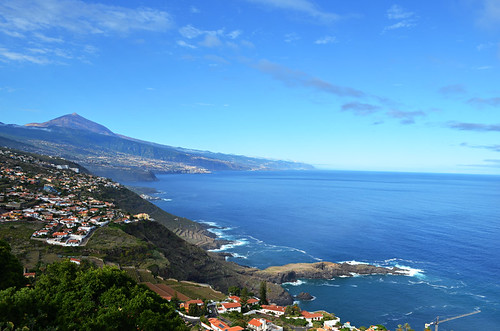 Tenerife Weather 22 to 28 August
It was a very hot and sunny week across Tenerife, although yet another calima meant parts seemed more hazy than sunny. We spent the weekend on El Hierro which usually escapes the worst of the summer heat, but even there calima was noticeable with hot and sticky weather and hazy skies.

Weather Forecast for Tenerife 29 August to 4 September
A calima means another blisteringly hot start to the week with temperatures possibly reaching 34C. A yellow level weather alert covers the south, south west and east but not the north where temperatures should be around the 29C mark. From Wednesday things settle down with temperatures only varying by a degree or two on all coasts. There might be some showers during the second half of the week but these are likely to be in the hills and probably at night or early morning.

Weather in South Tenerife – It should be mainly a sunny week with some light cloud over the weekend. Apart from a yellow level weather alert at the start of the week with temperatures of 34C possible, temperatures should stick around 25/26C all week. There’s an outside chance of a shower or two over the weekend (5-15%), more than likely in the hills.

Weather in North Tenerife – It should be a week where there’s a mix of sun and light cloud most days with a 10 to 35% chance of showers during the second half of the week. Apart from a hot start to the week (29C), temperatures should stick around 24/25C from Wednesday onwards.

Weather in East Tenerife – After a mainly sunny start to the week, it should be a mix of sun and cloud in Santa Cruz and the east with a 5 to 50% possibility of light rain from Wednesday evening. A yellow level weather alert also affects the east at the start of the week but from Wednesday temperatures should stay around 23/24C.

Weather in the Mount Teide Crater – It should be mainly sunny in Teide National Park but there could be cloudy spells during Tuesday and on Friday, Saturday and Sunday afternoon with the possibility of showers on Sunday evening. It’s a similar outlook for the summit of Mount Teide, except with fewer clouds on Friday and Saturday afternoons. Temperatures should hover between 13 and 20C in the crater and 6 and 11C on the peak of Mount Teide.

The Tenerife Weather This Time in 2015
So what happened this time last year? ‘… Some parts of Tenerife mainly enjoyed a blisteringly hot and sunny week, whilst others experienced some cloudy periods with their sunshine. The north and east probably had the most sunshine.’

Pic: Hopefully September will see the end of summer calimas for a while replaced by, the clear, sharp visibility we associate with the month.

Behind the Screens on Walking Tenerife

Routes we like best are the ones that are not on the radar of the walking groups, the ones that take unexpected twists and turns, that traverse paths that once formed lifelines between communities but have long fallen into disuse. Those are the routes that give us most pleasure… […]