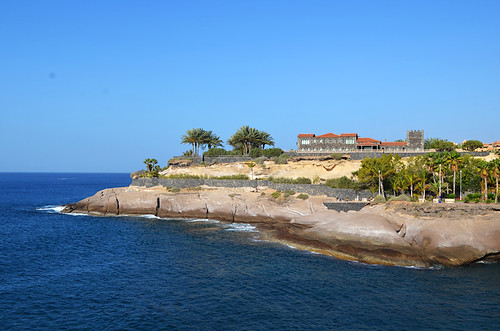 Weather Forecast for Tenerife 29 December to 4 January
It’s been an interesting week as far as weather on Tenerife goes. On the one hand it was mostly beautifully sunny across Tenerife. Another calima brought dust and wind, but on this occasion not warm wind. This time the breeze was positively cool and even being in the sun didn’t help much over the weekend. The big difference between how it felt on both sides of the island was down to the breeze which affected high ground and southern coastal areas more than northern ones. It’s not often we’ve been in the sunshine and felt cold on Tenerife, even up high, but although it might have looked perfect weather on webcams, it was definitely ‘jacket during the day’ weather in the south and south east over the last few days.

Weather Forecast for Tenerife 6 to 11 January
It looks as though those clear blue skies might disappear with the Christmas decorations. Although it’s not looking like a bad week on Tenerife – there will be sunshine most days – there will be more cloud than in recent weeks. There’s also a good chance of some rain in most municipalities. It’s not going to get any warmer yet and in fact Friday will be cool in the shade everywhere. It should be warm in the sunshine, unless you’re in a breezy area. Most dramatic impact could be on Mount Teide where there will be snow and almost Arctic temperatures.

Weather in South Tenerife – The week will start sunny but cloud will roll in on Tuesday afternoon and after that there will be a mix of cloud and sun for the rest of the week with a 10 to 65% possibility of rain. Friday especially looks gloomy but the weekend looks a lot brighter. Temperatures will start the week at around 20C in the shade, dropping to a low-for-Tenerife 15C on Friday before rising back to 19/20C for the weekend.

Weather in North Tenerife –  There’s a similar pattern in the north but there should be sunshine every day and the cloud might not be quite so thick. There’s a good chance of rain (10 to 80%) with Thursday morning and Friday afternoon look dullest and most likely. Temperatures start the week at 18/19C before dropping to potentially as low as 13C in the shade on Friday then rising to 17C for the weekend.

Weather in East Tenerife –  A mix of cloud and sun every day except Friday which will be overcast all day. Like everywhere else, there’s the likelihood of rain during the week (10-80%), especially on Friday. Temperatures reflect those in the north.

Weather in South West Tenerife – Much the same story as the south of Tenerife.

Weather in the Mount Teide Crater –  There will be the usual lots of sunshine in Teide National Park. However, there could be rain in the crater on Thursday which might even morph into snow on Friday. On the summit, the snowfall could start on Wednesday night and last until Friday night. It is also going to be seriously cold on Teide with temperatures in the crater ranging from 2 to 9C and between -3 and a -9C on the summit of Mount Teide. The wind chill factor could make it feel as cold as -19C. There are also quite strong winds expected on Thursday and Friday, so it’s unlikely the cable car will be running on those days.