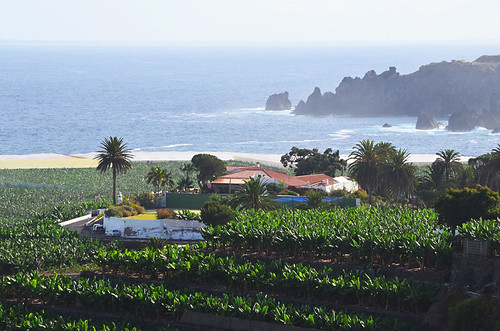 Weather Forecast for 28 September to 4 October
We were in Britain during the week so can’t say what the weather on Tenerife was really doing. From webcams it looked like much of the same as in recent weeks with plenty of sunshine but also cloudy spells. As for the rain forecast before we left, we know it fell in some places but we returned home to very thirsty plants on the verge of death. What was clear (or hazy in this case) as we flew into Tenerife Sur was that a calima (a hot, sand cloud) was also visiting. Stepping from the plane quickly reminded that a warm October in Britain wasn’t quite the same as a hot and sticky one on Tenerife.

Weather Forecast for Tenerife 5 to 11 October
Although the alert hot weather was lifted on Sunday evening, the week will start muggy and very hot as the calima drifts away (the eastern Canary Islands remain on alert until 8pm tonight). Things should freshen up everywhere from Tuesday when shade temperatures should drop to the low/mid 20sC for the second part of the week when there could be cloudy spells and a chance of showers everywhere. In many ways not much different from the pattern of previous weeks.

Weather in South Tenerife –  It should be a sunny and very hot start to the week. From Thursday through to the weekend it might be cloudy with sunny spells and 45-85% chance of rain. Temperatures start the week at 32C and drop gradually as the week goes on to bottom out at 22/24C from Wednesday.

Weather in North Tenerife –  In the north, Monday and Tuesday should be mainly sunny with cloud and sunny spells from Wednesday. The chance of rain is slightly less than in the south at 5 to 75% for the second half of the week. Temperatures start the week at 28C and end the week at 22C.

Weather in South West Tenerife –  Similar to the south of Tenerife except with a slightly less possibility of rain (10 to 75% from Wednesday afternoon onwards) and also a couple of degrees hotter, starting the week at 34C before dropping from Tuesday to settle at 22/24C from Wednesday.

Weather in the Mount Teide Crater –  Apart from Tuesday when it will be full on sun, there could be cloud and even showers at some point during each day this week at crater level. The summit of Mount Teide should see mainly sunshine except for Monday morning and Friday afternoon when there could be cloud and showers. Friday could also see cloudy spells but no rain. Temperatures should hover between 12 and 17C in the crater and 5 and 9C on the summit of Mount Teide. Monday morning could see strong winds on the summit so check if the cable car is running on these days.

The Tenerife Weather This Time in 2014
So what happened this time last year? ‘…it was a bit of a mixed week everywhere with nearly all of Tenerife’s coastal areas experiencing sunshine, cloud and rain.’

Pic: From this time last year, early morning at a banana plantation and hacienda near Garachico.