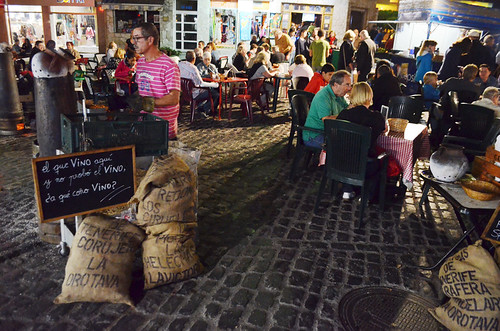 Weather Forecast for 23 to 29 November
Despite a suntan-seeking woman in a bar telling us it had rained for four days non stop, it was actually a nicer week than the one forecast. I’ve no idea why the woman told us that, maybe she thought we were newbie visitors. When we told her we lived here she rapidly backtracked and amended her version of the weather. The irony is she actually had managed to build up a good suntan. There was quite a bit of cloud most places with occasional light rain (it wouldn’t be San Andrés without some rain) but a lot less than expected. There were also plenty of sunny spells. Not wall-to-wall sunshine but, for the end of November, it was better than in many other years.

Weather Forecast for Tenerife 30 November to 6 December
The outlook for the first week of December on Tenerife is looking quite good. The week should start with cloudy spells, sunshine and a good chance of showers at some point on Monday. Tuesday in the south looks cloudiest, but after that it should be a sunny week with some cloud and only a slight chance of showers. The week should start very warm, with shade temperatures reaching upper 20s in some parts of the coast before it settles at 19/22C in the shade more or less everywhere.

Weather in South Tenerife –  The week should start with a mix of cloud and sun on Monday with a 65% possibility of rain and a rather grim looking day on Tuesday, although rain is less likely (15-30%). After that it’s good news with mainly sunshine for the rest of the week and only some cloud mixed in with the sun. There will still be an outside chance of drizzle on most days. Temperatures start the week at a very warm 26/28C but drop to 21/22C from Wednesday.

Weather in North Tenerife –  Apart from not having quite such a cloudy Tuesday, it’s a similar pattern in the north where the greatest chance of rain will be today (Monday) when there’s a 60% possibility. After that there’s only a slight chance of a shower or two. But it should mainly be sunny all week with some cloudy spells. Temperatures start the week at 22/23C and drop a degree or two from Wednesday onwards.

Weather in South West Tenerife –  The south west will be more or less the same as the south although Monday might see more cloud and Tuesday more sun, especially in the afternoon. Like everywhere else, there’s a likelihood of some showers today (70%). Temperatures should also match those predicted for the south.

Weather in the Mount Teide Crater – It’s quite a different scene on Mount Teide and in Teide National Park where there could be cloudy spells and showers mixed in with the sunshine between Monday and Friday morning (Wednesday should be cloud free). From Friday afternoon it could turn grey and rainy for the rest of the weekend. On the summit of Mount Teide some snow is possible on Monday and Tuesday and also overnight over the weekend. However, temperatures aren’t as low as they can be at this time of year at that altitude and that might mean rain is more likely than snow. Temperatures should hover between 10 and 12C in the crater and 0 and 2C on the summit of Mount Teide.

The Tenerife Weather This Time in 2014
So what happened this time last year? In some ways similar, but 2015 is looking a bit better than 2014 – ‘a mix of cloud, sun and rain with temperatures starting the week warm but dropping as the week progresses.’

Pic: It stayed dry on Saturday for the wine and chestnuts of San Andrés in Puerto de la Cruz.